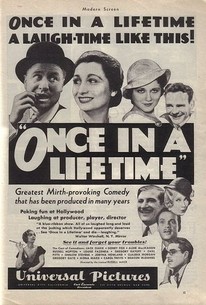 Once in a Lifetime Photos

Based on the stage comedy by Moss Hart and George S. Kaufman, Once in a Lifetime is a satire of Hollywood's early-talkie era. A down-and-out vaudeville trio (Jack Oakie, Aline MacMahon, and Russell Hopton) takes advantage of the confusion attending the talkie revolution by heading to Hollywood and posing as voice experts. George (Oakie), the team's dimwitted straight man, falls in love with a pretty young miss (Sidney Fox) who has come to Hollywood to become an actress -- and won't let her utter lack of talent get in the way. Fast-talking themselves into jobs at the Glogauer Studios, the phony vocal specialists eventually wear out their welcome and are on the verge of being fired. But George, who has been listening to the complaints of a disillusioned screenwriter, suddenly spouts those complaints word for word to Mr. Glogauer (Gregory Ratoff) -- and is lauded as a genius for being the first man to stand up to the despotic studio head. George is made a producer, and immediately sets about filming an expensive movie vehicle for his girlfriend. Unfortunately, George had found the script for his film in a wastebasket, and winds up shooting the wrong picture. He and his vaudeville chums are fired, but when his picture (an incomprehensible farrago shot in darkness because George forgot to turn on the klieg lights) is previewed, it is hailed as a daringly original masterpiece. George is made the supervising producer of Glogauer Studios, and all ends happily for himself and his friends. An interesting precursor to the Singin' in the Rain school of Hollywood kidding itself, Once in a Lifetime has tarnished a bit over the years but is still well worth seeing. ~ Hal Erickson, Rovi

Aline MacMahon
as May Daniels

Leyland Hodgson
as Reporter
View All

Critic Reviews for Once in a Lifetime

Emerges from the movie factory weak and trembling and looking itself a great deal like an imitation.

There are no featured reviews for Once in a Lifetime at this time.

Once in a Lifetime Quotes