Once Upon a Deadpool2018 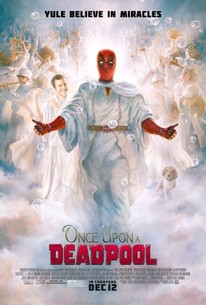 Critics Consensus: Once Upon a Deadpool retains enough of the franchise's anarchic spirit to entertain, but doesn't add enough to Deadpool 2 to justify its own existence.

Critics Consensus: Once Upon a Deadpool retains enough of the franchise's anarchic spirit to entertain, but doesn't add enough to Deadpool 2 to justify its own existence.

Critic Consensus: Once Upon a Deadpool retains enough of the franchise's anarchic spirit to entertain, but doesn't add enough to Deadpool 2 to justify its own existence.

Once Upon a Deadpool Videos

Once Upon a Deadpool Photos

"Fox has been asking for a PG-13 basically since the start in 2006," Ryan Reynolds told Deadline. "I've said no since 2006. Now, this one time, I said 'Yes' on two conditions. First, a portion of the proceeds had to go to charity. Second, I wanted to kidnap Fred Savage. The second condition took some explaining..."Fred Savage will join Reynolds in new scenes for ONCE UPON A DEADPOOL in an homage to Savage's starring role in the 1987 bedtime-story classic THE PRINCESS BRIDE. Fred remarked, "while my participation in this film was anything but voluntary, I am happy to learn that Fudge Cancer will be the beneficiary of this shameless cash grab"

Eddie Marsan
as The Headmaster

Rob Delaney
as Peter
View All

News & Interviews for Once Upon a Deadpool

View All Once Upon a Deadpool News

Critic Reviews for Once Upon a Deadpool

The sequel zips along as the motormouth assassin tries to clean up his act (sort of).

It's cute and funny.

It's a sick, dumb joke that you can't help but laugh at. And as soon as you do, you feel bad about falling for the gag.

A conceit that could have been charming instead comes across as crass.

Here comes Once Upon a Deadpool, a movie that's one-part TV edit, one-part DVD extra, and a whole lot of WTF.

So what if it's a story we've seen already this year? It's still a blast, and with added Savage it manages to be a good-hearted cash-in that retains the original's mix of emotion and acerbic humor while providing a hilarious commentary on the film itself.

Once Upon a Deadpool is not a wholly satisfying experience, but it adds a little more heart to a film that already had more than you'd expect.

An adequate gimmick that doesn't entirely pan out.

This Deadpool movie has more heart and heartbreak, a surer handle on its storytelling, and a clearer sense of how breaking the fourth wall can be used to comic effect.

The swagger that makes Deadpool the anti-hero of the box office is gone entirely.

It's an entertaining outing which younger fans can enjoy if they're allowed to watch most of what's already on television and adults will enjoy it for its slew of new jokes and ever-abundant pop culture references.

Can Deadpool be just as funny without the R rated humor and graphic violence? Yes he can, and it is very entertaining.

Audience Reviews for Once Upon a Deadpool

It's still Deadpool, it's still funny, it's still good enough, but it's not different enough to be worth it. As a novelty, it's notable enough, and the additional footage with Fred Savage is funny. I do like how Savage even comments on some of the criticisms of the movie, like the fridging of Vanessa or Cable's lack of complexity compared to the comics. However I'm not really sure who this movie's supposed to be for. It comments on the original take on Deadpool 2 in some funny ways, but it doesn't have the bite of Deadpool 2 which makes it a charming novelty but ultimately pointless. It could be for families I guess, but then they're going to miss the references to the original version, and then it takes away some of the elements of the original that it doesn't need to. There are some great scenes that get shortened or cut out entirely that didn't need to. Sometimes there's a dramatic moment that's undercut by an insert from Fred Savage, which is funny if you've seen the original, but kind of ruins the moment. This is really a weird idea overall. I mean, it's still Deadpool, there's stuff in it that still works because the original worked, but ultimately this take on it is kind of a failed experiment.

Once Upon a Deadpool Quotes