Once Upon a Time in China and America1997 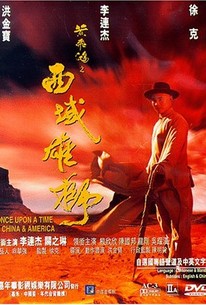 Once Upon a Time in China and America Photos

Martial arts master/doctor Wong Fei-hung (a familiar character in Hong Kong cinema) and his gang find adventure amidst the cowboys and Indians of the American West. The sixth in the enormously popular "Once Upon a Time in China" series of Hong Kong action films that was created by director Tsui Hark in 1991, this episode takes an entirely new direction for the series; it features plenty of broad comedy in the first half (though whether or not it was intentional is debatable), eye-popping stunts and excitement. In another unusual turn, it was also shot with scenes in English as well as the standard Cantonese. Wong's adventure's begins when he and his gang sail to San Francisco to oversee the latest branch of their Bo Chi Lam. They find a country where the Chinese are exploited and despised. Soon after arriving, the courageous Wong (Jet Li) loses his memory after the daring rescue of Aunt Yee (Rosamund Kwan), Wong's long-time love, who was just about to fall from a cliff. Separated from his group, the amnesiac Master Wong ends up with a tribe of Native Americans (all of whom are obviously white), who adopt him. Though they too know martial arts (as do the cowboys Wong encounters), but are no match for Wong, who proves his skill by single-handedly braving the spears, kicks and chops of an enemy tribe. Eventually, Wong reconnects with Aunt Yee and his gang; together they go on to have more adventures and battle a number of evil villains.

Critic Reviews for Once Upon a Time in China and America

There are no critic reviews yet for Once Upon a Time in China and America. Keep checking Rotten Tomatoes for updates!

Audience Reviews for Once Upon a Time in China and America

I'm happy to see Jet Li returned to his main character as Wong Fei Hung in this next adventure since part 3. The frequent fight scenes (choreographed by director Sammo Hung) are as exciting as ever. Jet's cool bullet-dodging in the climactic fight is fun, but only real highlight is the scene where Fei Hung's loyal comrade Seven attempts to cure his master's amnesia by fighting him in the styles of villains from the previous films.

Once Upon a Time in China and America Quotes