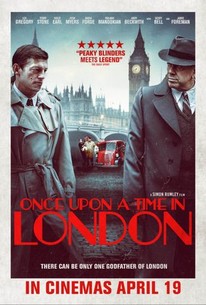 For the first time ever, the violent reign of two of London's most notorious gangsters, Jack 'Spot' Comer and Billy Hill, is grippingly brought to the big screen by visionary director Simon Rumley (Red, White & Blue, Crowhurst, Fashionista), in a sweeping saga of madness, mayhem and manipulation reminiscent of British favourites Legend and Peaky Blinders. ONCE UPON A TIME IN LONDON charts the epic rise and legendary fall of a nationwide criminal empire that lasted for three action-packed decades which paved the way for the notorious Kray twins to exert their dominance over the capital's gangland realm.

Critic Reviews for Once Upon A Time In London

A difference, in that it goes out of its way to deglamourise the lives of its toerag protagonists - chisellers, extorters and degenerates to a man.

If the intended audience for this is people who like true crime books with retro cover art then this will probably scratch their itch. But it's not hard to see that the budget was modest and spread as thin as it possibly could be.

There's so many kickings, beatings and slashings administered, it almost tips into self-parody.

The storytelling is inadequate, the lack of budget is glaring, the cinematography is perfunctory at best and the soundtrack is an irritating and repetitive pastiche of mostly lousy songs.

You'd think a more colorful film could have been wrung out of this lot, and not the dry jerky drift through the decades that director Simon Rumley and British acting's C-list deliver.

The performances are solid, the visuals slick and the pastiche score catchily effective. Yet Rumley simply doesn't have the resources or the scope to do his ambition justice.

Audience Reviews for Once Upon A Time In London

There are no featured audience reviews yet. Click the link below to see what others say about Once Upon A Time In London!

Once Upon A Time In London Quotes