Once upon a Time in Mexico2003 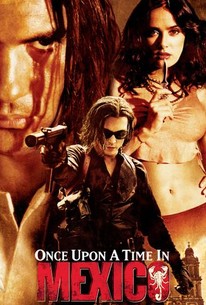 Once upon a Time in Mexico Photos

Haunted and scarred by tragedy, El Mariachi has retreated into a life of isolation. He is forced out of hiding when Sands, a corrupt CIA agent, recruits the reclusive hero to sabotage an assassination plot against the president of Mexico, which has been conceived by the evil cartel kingpin, Barillo. But El Mariachi also has his own reasons for returning--blood revenge. The desperado returns with his two capable cohorts Lorenzo and Fideo. And the legend of El Mariachi reaches new heights of adventure.

Pedro Armendáriz Jr.
as The President

Critic Reviews for Once upon a Time in Mexico

A succession of set pieces, however vivid and colourful will not alone make a coherent movie. And this is far from coherent. Colourful, but nuts.

A shoddy Sergio Leone 'tribute' filmed from a first draft by a director who lacks the discipline to match his talent.

As an iconic image, [Depp] captures the feeling of Rodriguez's movie: blinded and shooting randomly in all directions.

In fact, his main character the Mariachi disappears for long stretches of the film's brisk 97-minutes, the director instead choosing to shift much of the attention on Depp's beguilingly double-dealing CIA agent.

A movie with that many freaks and creeps should be a lot more exciting than this one actually is.

Robert Rodriguez's Mexico trilogy comes to a close with this disastrously underwhelming installment...

Replay a joke too often and the impact is gone, and Rodriguez's overuse of old movie riffs and smirking brutality is a joke that goes on for far too long.

Rodriguez understands how superficial his film really is, and uses humor to turn that flaw into an advantage.

Still loaded with action and wonderful characters, but this is the least of the three pictures.

...a cartoonish action movie that entertains without garnering empathy for any of its characters, with the exception of Ruben Blades' Jorge.

Would be such a good movie, were it not so utterly ridiculous and laden with sheer stupidity and nonsense...

Audience Reviews for Once upon a Time in Mexico

With an all-star cast and dynamic visualization, Rodriguez's third installment of the "El Mariachi" trilogy surpasses those that followed. With a dazzling presentation, violent storytelling and surprising performance from Johnny Depp, the film is a joy for those who love Rodriguez's films and/or just plain enjoy action films. 4/5

Robert Rodriguez once again tries to out-pulp his long term collaborator Quentin Tarantino in yet another remake of El Mariachi. He makes no bones as to his intentions, the opening credit proclaiming it "A Robert Rodriguez flick" rather than "film", and the result is a slickly entertaining but rather vacuous affair. Desperado had just the right mix of drama, humour and action but this sequel is rather lacking in the dramatic momentum that involves the audience. I think the problem is that Banderas' character is easily the least interesting of the ensemble cast; he does little more than mope around and shoot stuff in increasingly over the top set pieces to the point where it starts to feel like a hispanic Jackie Chan movie without the jokes. Far more interesting is Johnny Depp's amoral and smart-mouthed CIA agent, complete with tourist's wardrobe, fake arm and collection of comedy moustaches; I couldn't help thinking that it would've been a much better film if HE were the central character. But as it is, it's a fun slice of popcorn entertainment, and with Depp, Banderas, Salma Hayek (who is otherwise wasted) and Eva Mendes in the mix, there's plenty of eye candy for both sexes.

The conclusion to Robert Rodriguez's mariachi trilogy is a pretty epic, and really badass way to bring things to a close. There are however, too many subplots and characters, most of which don't make sense or are not handled all that well. I don't think that's why people wanna see this, or why they should see it though. This isn't about the plot or stories, but the stunts and spectacle. That's where this film really shines. The action is intense, well choreographed, and plentiful. There are a few too mant characters, but some of them are still pretty cool and quirky, especially the one played superbly by Johnny Depp. Doing just about everything but acting, Rodriguez delivers a rousing film here, and does a pretty excellent job (excluding the iffy screenplay, that is). This is probably #2 as far as ranking the trilogy goes, even though I've always had a soft spot for Desperado. If you want crazy action done right, then don't hesitate to give this one a watch.

This movie proves that Robert Rodrigeuz is capable of making great movies. This movie has fantastic acting, some funny moments, and a coll but unrealistic plot. The main reason I love this movie is it has my all time favorite movie quote: "El, you really must try this because it's puerco pibil. It's a slow-roasted pork, nothing fancy. It just happens to be my favorite, and I order it with a tequila and lime in every dive I go to in this country. And honestly, that is the best it's ever been anywhere. In fact, it's too good. It's so good that when I'm finished, I'll pay my check, walk straight into the kitchen and shoot the cook. Because that's what I do. I restore the balance to this country. And that is what I would like from you right now. Help keep the balance by pulling the trigger." The only bad I can think of is that sometimes all the violence is kind of unnecesary. People shoot each other for practically no reason at all sometimes. In the real world, this amount of violence would never happen, even in a poor, crime filled area. The acting is amazing. Banderas was pretty good, but what really makes this movie? Johnny Depp as Agent Sands. It is some of the best acting I've ever seen. It's realistic, stylish and sometimes humorous or dark. Think Bullseye only not as evil. The fight scenes in this movie have more choreography then some of the best superhero films. It's like a bit of a more intelligent Tom and Jerry, in a good way. The church battle in particular was amazing. Overrall, this is an amazing movie. For anyone who loves a smart but wacky action movie, I suggest Once Upon A Time In Mexico today.

Once upon a Time in Mexico Quotes