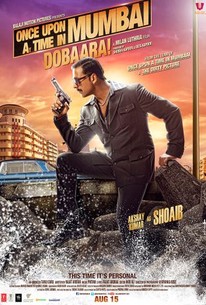 Once Upon a Time in Mumbai Dobaara! Photos

Once Upon A Time In Mumbai Dobaara (Again) is the story of an underworld don, Shoaib (Akshay Kumar), who killed his mentor in the past (Once Upon A Time In Mumbai) to gain supremacy and is now the ruling mafia king. His influence and power has spread right up to the Middle East, today. Shoaib is now a flamboyant, suave man who is feared and revered. Shoaib's only confidantes are his best friend Javed, who oversees his empire for him and his former lover Mumtaz (Sonali Bendre) who is now his closest friend. He often visits the poor Muslim areas where he grew up and it is on one such visit that he meets Aslam (Imran Khan). He takes him under his wings and gradually Aslam becomes one of his favourites. (c) B4U

Critic Reviews for Once Upon a Time in Mumbai Dobaara!

After all the shoot-outs and bang-bangs are over, you are left with a film which leaves you with so little new that you wonder if there's any juice left in this style of retro gangsta flick.

Once the movie becomes a slackly-paced love triangle, it suffers from how badly the character of Jasmine is written.

Dobaara! is frontloaded with songs, romance, and action. The second half of the film, the part where everyone gets shot, drags by comparison, and may leave viewers disappointed by a story that ends so predictably.

There are no featured reviews for Once Upon a Time in Mumbai Dobaara! at this time.

Once Upon a Time in Mumbai Dobaara! Quotes