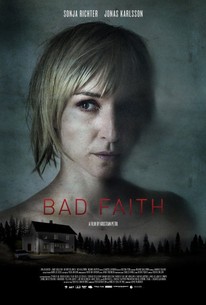 A disturbed woman and a violent lunatic walk the same path in this thriller from Swedish director Kristian Petri. Monia (Sonja Richter) is a businesswoman who has been hired to work for a large corporation based in Gothenburg. One evening, while having drinks with her colleagues, Monia steps outside for some air and she happens upon a man who has been brutally stabbed by a serial killer on the loose. Monia, who feels a curious emotional distance from the world around her, isn't sure what to make of this incident at first, but she can't get the violent image out of her mind, and over the next several days she keeps stumbling upon victims of the killer's handiwork. No one finds any of this remarkable besides her friend Frank (Jonas Karlsson), but in time she begins crossing paths with a curious man (Kristoffer Joyner) who seems to appear at the same crimes scenes she observes. Ond Tro (aka Bad Faith) was an official selection at the 2010 Toronto International Film Festival.

Petri loses out to the cinema's air conditioner when it comes to delivering chills during the film's ineffective climax.

There are no featured reviews for Ond tro (Bad Faith) at this time.