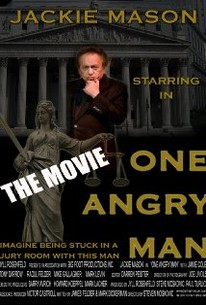 Conceived as a satirical reimagining of Reginald Rose's play and teleplay 12 Angry Men, this comedy toplines funnyman Jackie Mason, who plays himself. Days before his new Broadway show is scheduled to open, Jackie receives a summons to serve jury duty. His attorney, Raoul Felder, tries to extricate him, and Jackie makes a concerted attempt to talk his way out of the jury, but his efforts have the opposite effect. His fellow participants in the box include an airheaded model (Stacey Sipowicz), a women's rights advocate (Pamela Saubaugh), a self-deprecating Jewish man (Marty McDonough), a transvestite (Frank Anthony Polito) and many others - all arguing amongst one another to try to determine if an Arabic teenager named Yusef (Justin P. Nardecchia) is guilty of slaying a respected police veteran. Naturally, Jackie stirs up chaos, and tempers flare as the summoned argue with one another. But eventually Jackie becomes convinced of Yusef's innocence, and begins trying to convince the others of this position.

Pamela Sabaugh
as Feminist
View All

Critic Reviews for One Angry Man

There are no critic reviews yet for One Angry Man. Keep checking Rotten Tomatoes for updates!

There are no featured reviews for One Angry Man at this time.