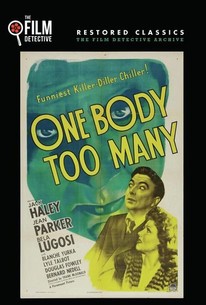 Another of Jack Haley's comedy vehicles for Pine-Thomas productions, One Body Too Many casts Haley as timid insurance salesman Albert Tuttle. Much against his better judgment, Tuttle makes a business call at a sinister old mansion, intending to sell life insurance to the owner. He proves a bit late, inasmuch as the owner has just kicked the bucket. The mansion is full of avaricious relatives, who are obliged by the dictates of the decedent's will to remain in the house until the authorities claim the body. Realizing that dead man's niece Carol (Jean Parker) is a damsel in all kinds of distress, Albert decides to stick around to keep Carol from meeting her uncle's fate. Though there's a murder-mystery angle in One Body too Many, the audience knows who didn't do it the moment Bela Lugosi shows up as a butler.

William Edmunds
as the Professor
View All

Critic Reviews for One Body Too Many

Audience Reviews for One Body Too Many

As Abbott & Costello (and also Bob Hope) discovered, spoofing spooky sold to the yokels, and viola!, Jack Haley mines the same in this riff on the one-of-the-people-in-this-house-is-a-murderer convention. Haley is not as swift with the yuks as those previously mentioned, but the supporting cast sort of makes up for it. The best? Oy, it's Lugosi, as the butler with murder on his mind ... a hoot.

First of all, I need to see this movie again, but I remember it being good. I saw this for Lugosi, and I think he was good in it, but like I said, I should see this again.

One Body Too Many Quotes