One Bright Shining Moment: The Forgotten Summer of George McGovern (2005) 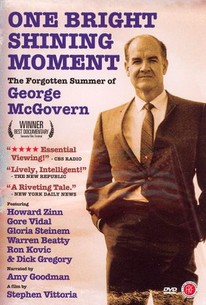 In the spring and summer of 1972, George McGovern, a Democratic senator from South Dakota, achieved the seemingly impossible. Backed by a motley collection of Prairie populists, old-school liberals, and young people disenchanted with the war in Vietnam, McGovern overwhelmed longtime party favorites such as Hubert Humphrey and Edmund Muskie to win the Democratic nomination for the presidency of the United States. However, McGovern's triumph proved to be short-lived; after his initial running mate, Thomas Eagleton, was revealed to have a history of mental illness, the McGovern campaign went into a tailspin from which it would never recover, with the incumbent Richard Nixon winning the 1972 election by a landslide. However, McGovern's campaign is still remembered by many as one of the last examples of a candidate truly triumphing through the will of the people rather than working the party political machine, and given the scandalous downfall of Nixon following his re-election, many have wondered what America would be like today if McGovern, once described by Robert F. Kennedy as "the most decent man in the Senate," had won. One Bright Shining Moment: The Forgotten Summer of George McGovern is a documentary which looks back at the McGovern campaign and explores what went right, what went wrong, and what was McGovern's true legacy. The film includes interviews with Howard Zinn, Gloria Steinem, Gary Hart, Frank Mankiewicz, Warren Beatty, Gore Vidal, Ron Kovic, and McGovern himself.

Critic Reviews for One Bright Shining Moment: The Forgotten Summer of George McGovern

It's a deeply flawed film but also an important one; if it does nothing else it should bring this decent and courageous prairie populist, whose very name has become a patently unfair term of abuse, before at least a few members of a new generation.

Parallels to the current day are plain to see, so Vittoria's insistence on juxtaposing images of contemporary politicians and an angry narration only undercut the power of his otherwise absorbing presentation.

A wan but well-researched apotheosis of the former senator from South Dakota.

Exactly the sort of starry-eyed, bullet-spraying hyperbole that drains credibility from any brand of political discourse.

What the film aims to show -- and does well ... is that McGovern's grassroots, anti-establishment tactics and ultimate victory at the Democratic convention was, and remains, an example of what U.S. politics strive, and generally fail, to achieve.

An effort to secure former Sen. George McGovern's place in history, and it does a pretty good job.

Just too hagiographic to engage anyone but the most nostalgic follower of the 1972 campaign.

This is an excellent time to remind ourselves of this story. Another McGovern would have been a good thing to have the last five years.

In terms of recapturing the time that was, One Bright Shining Moment is rather effective -- although it feels to be revealing that time from certain distance.

[Goes] a long way to rehabilitating this unfairly maligned candidate.

Audience Reviews for One Bright Shining Moment: The Forgotten Summer of George McGovern

I would not have automatically guessed it, but this is not what you would call an objective documentary. Of course I did guess pretty quickly that objectivity was not the purpose of this documentary, given the immediate injection of very subjective commentary by Amy Goodman -- whom, as the founder of Democracy Now!, I very much admire. As narrator, she definitely sets the tone for a heavily one-sided view of George McGovern. Fortunately, Ms. Goodman is preaching to the choir here, because I too believe that had McGovern been elected president, we would not find ourselves in this morass which we currently enjoy under the Bush administration -- which will finally go away in eleven months, only to be remembered forever as the most disastrous administration in the history of the United States of America.

[font=Century Gothic]Narrated by Amy Goodman, "One Bright Shining Moment" is a documentary about former United States Senator and 1972 Democratic Nominee George McGovern, focusing on his antiwar politics. His 1972 campaign was seen as a ray of hope for a more participatory democracy.(McGovern headed a commission following the 1968 election which greatly reformed primary rules. Here, they are hailed as the savior of the Democratic Party but I seem to recall Eugene McCarthy grousing about them in one of his memoirs.) Along with archive footage and recent interviews with McGovern, testimony is also shown from the likes of Gloria Steinem, Warren Beatty, Howard Zinn, Dick Gregory, Gore Vidal and Jim Bouton(?!?). Also heard from is members of his 1972 campaign staff including Gary Hart.[/font] [font=Century Gothic][/font] [font=Century Gothic]The documentary is less than thrilled with both Republicans and Democrats(but it still goes lightly on the Kennedy's), portraying McGovern as the last good man. While it is true that he is a genuine humanist and that many things would have been better if he had won(particularly with Chile and East Timor), I think it is incorrect to portray him as the only congressional opponent to the Vietnam War.(His sympathy is for both American soldiers and Vietnamese civilians.) I know the Vietnam War was the impetus for his campaign but the documentary spends too much time rehashing familiar information. Plus, some of the commentary veers on the irrelevant side. [/font] [font=Century Gothic][/font] [font=Century Gothic]And Hunter S. Thompson is notable by his absence. [/font]