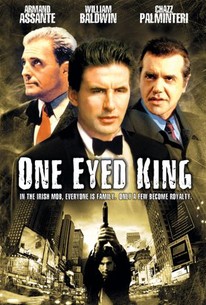 The debut feature from television producer Robert Moresco, One Eyed King is an ensemble crime drama detailing the trials and tribulations of several characters living together in the same Hell's Kitchen neighborhood. Starring Armand Assante, William Baldwin, Jim Breuer, Bruno Kirby, Chazz Palminteri, and Jason Gedrick, the film had its premiere at the 2001 Boston Film Festival.

Josh Hopkins
as Chuck
View All

Critic Reviews for One Eyed King

There are no critic reviews yet for One Eyed King. Keep checking Rotten Tomatoes for updates!

Audience Reviews for One Eyed King

Very early William Baldwin, about a group of 5 who are bonded in hells kitchen as they grow up, one by one the fall to evil, Baldwin is the only one who survives, great story and action. 5 stars