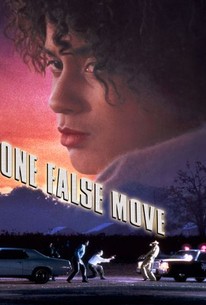 Critics Consensus: One False Move makes nary a misstep as it unfurls a seedy caper with hard-hitting action and sly humor, marking an arresting debut for director Carl Franklin.

Critics Consensus: One False Move makes nary a misstep as it unfurls a seedy caper with hard-hitting action and sly humor, marking an arresting debut for director Carl Franklin.

Critic Consensus: One False Move makes nary a misstep as it unfurls a seedy caper with hard-hitting action and sly humor, marking an arresting debut for director Carl Franklin.

Carl Franklin made his directorial bow with the story of three LA drug dealers who, after committing a rather messy murder, hide out in a rural Arkansas town. Assuming that the local "rubes" will offer them little interference, the criminals have not reckoned with sheriff "Hurricane" Dixon (Bill Paxton). Despite the arrogance of the LAPD agents sent to Arkansas to collar the crooks, it is down-home Dixon who puts the final bloody showdown into motion (the fact that the thieves have been falling out throughout the film doesn't hurt things either). Carl Franklin knows where he's going in every frenetic frame of One False Move, and his movie was one of the most acclaimed independent releases of 1991.

Rocky Giordani
as Billy "The Face"

News & Interviews for One False Move

View All One False Move News

Critic Reviews for One False Move

Franklin seizes the opportunity to make a film that tightly binds up any political concerns it may have into the plot.

Clark Franklin's One False Move brings a shotgun to a knife fight, and the results aren't pretty.

Franklin's convincing portrait of life on both sides of the color line isn't quite like anything I've come across before, making One False Move one very assured directorial move. We need more filmmakers like him.

For most of the way, One False Move is taut and sure-footed.

Skillfully performed and welcomely unpredictable, this low-budget crime film, made by actor turned director Carl Franklin, starts out as a herky-jerky exploitation piece, then turns into something better.

Everything about this movie -- the terse writing, the concise directing, the smart, unaffected acting -- is eminently satisfying.

One False Move is a very satisfying discovery, for it is a film of vicious force and emotional depth that has no flaw worth mentioning.

The overall journey is slow and in great need of editing or reworking to create keener emphasis on the motives that lead to specific choices and confrontations.

Even worse than this annoying contrivance is Fantasia's portentous speech about the cry of a whippoorwill. And, yes, we actually do hear a whippoorwill cry. Perhaps it's a sign of the death of the hopes the promising film gives rise to, but then betrays.

The film is not quite the masterpiece some have hailed, but it has a bluesy grip, subtle humour and more thought than the average thriller.

In this film ably directed by Carl Franklin, who has spent most of his adulthood as an actor, there are more than a few tense scenes.

Audience Reviews for One False Move

"One False Move" is a masterful detective thriller, and unfortunately one that sits high atop the list of forgotten 90s classics. The great strength of the film, a story that shares on-paper familiarity with countless crime yarns, is the dimensions of it's characters who never feel less than real; sometimes frighteningly so. Co-written by Billy Bob Thornton, the screenplay abides by it's characters and propels a thriller not on action and overbearing dramatics... or even plot but on character choice, and the tension build associated with reveals on their nature, intentions, and relationships with each other. Director Carl Franklin (who never topped his work here) punctuates his film with sudden, ice-cold bursts of violence and sets the stakes high early on, with a mood reminiscent of early Coen brothers and John Sayles. The dark tone is juxtaposed by unexpected heart and humor, in no small part due to the naive, enthusiastic "Hurricane" played by Bill Paxton in a terrific performance. The dynamics of the film are really exposed when he shows up, at which point "One False Move" becomes a fish out of water story, a family drama, a buddy film, and even a smart examination of racial themes. Franklin propels it all to gripping, brutally efficient finale that in it's plausibility should have taught twenty years of Hollywood thrillers a thing or two. "One False Move" is a great movie that does just about everything right. It's grim, at times relentlessly so... but ultimately becomes so much more than a sum of it's noir elements. A standout of 90's filmmaking.

One False Move was simply a beautiful, and little seen, crime film. Three drug dealers on the run are suspected to be heading towards Arkansas. Here, a couple of big city cops meet up with the local sheriff. Paxton is fantastic in this role. He's not very worldly, has never had to use his gun, and is just a little too excited about the approaching threat. His enthusiasm comes off as naivety, and he is laughed off by the LAPD. The film does well to follow the cops and the killers. We see a bizarre triangle between the murderers. Thornton is filled with anger and out of control, whereas his partner is cool and calm but ultimately terrifying. The pacing of this film was done very well, offering moments of tension in a film that has a lot of waiting around. It also harvests a lot of emotion and depth for its characters. Paxton comes off the best as a giddy little boy waiting for Christmas. There are some great moments, such as his reaction to hearing the teasing from the city cops. Another scene sees him use the "n" word in front of the black cop. His facial expression is priceless, as he realises what he has said. Eventually Paxton takes responsibility, and he shows that his enthusiasm masks his competence. A big fish in a small pond. One False Move is very dark, but has a lot going for it. Most of all the tender ending.

lean and mean neo-noir. too bad carl franklin never made another film this good

As two psychotic murderers and their sexy bi-racial moll make their way across Texas towards Star City, Arkansas, the enthusiastic but inexperienced police chief (Bill Paxton) prepares eagerly for the arrival of the big-time crooks. Well-scripted and executed thriller/drama with a twist on the stock character of the hick sheriff and a surprisingly emotional climax.