One Hundred Days in Palermo (Cento giorni a Palermo) (1984) 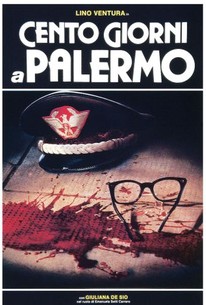 In many ways, this was a courageous film to make about Carlo Dalla Chiesa (played by Lino Ventura), an Italian general who gave his life trying to eliminate Mafia bosses and their supporters. Dalla Chiesa's wife was also murdered when her husband got too close to exposing the truth about the connections between the Mafia, the state, and the banking world. After Dalla Chiesa organized a campaign against the Red Brigades, he was sent to Sicily to clamp down on Mafia activities and bring some of the worst mob leaders to justice. His wife Emmanuela completely supported him in this dangerous undertaking, and during the course of his investigations, Dalla Chiesa began to check out the banks suspected in laundering money for the mob. That level of inquiry brought him a warning phone call from a government minister, and when he refused to stop his three-month investigation, he and his wife were murdered. In an eloquent statement of support for his efforts to combat the Mafia, a long list of sponsors for this film - including local organizations both inside and outside the government, anti-drug groups, and organizations in the cinematic field among many others, were listed in the closing credits.

Adalberto Maria Merli
as The Banker

There are no critic reviews yet for One Hundred Days in Palermo (Cento giorni a Palermo). Keep checking Rotten Tomatoes for updates!

There are no featured reviews for One Hundred Days in Palermo (Cento giorni a Palermo) at this time.

One Hundred Days in Palermo (Cento giorni a Palermo) Quotes