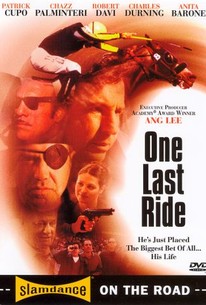 One man's life begins to crack under the weight of his compulsions in this drama. Michael (Patrick Cupo) works as a salesman for a garment firm in Los Angeles. Michael has a job, a wife named Gina (Anita Barone), and a baby on the way; however, he also has a gambling problem that is threatening to destroy him. As his debts mount, Michael is forced to lie to his boss (Charles Durning) in order to come up with money to pay his bookies, and as the pressures of his job and the coming responsibilities of fatherhood weigh on him, Michael sinks deeper and deeper into his addiction to gambling, always convinced the next bet will be the big win that pulls him out of the hole. One Last Ride was based on a play written by leading man Patrick Cupo.

Charles Durning
as Orlick
View All

Critic Reviews for One Last Ride

It'd be unkind not to give Cupo credit for taking a gamble, and ending up with a halfway decent film. But taking a gamble isn't the same thing as pulling it off.

Cupo's script never quite settles on a point of view, toggling wildly from the wise-guy mechanics of loan sharks and race forms to the personal concerns of an expectant wife and a steady job.

The potent cast, Tony Vitale's assured direction and a solid foundation with lead thesp Patrick Cupo adapting his own play help mitigate many of the pic's deficiencies.

There's something about Cupo that keeps us interested despite the thinness of the material.

There are no featured reviews for One Last Ride at this time.