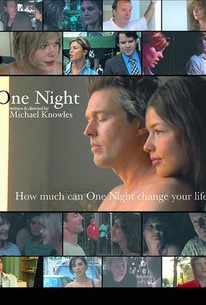 Fifteen New Yorkers head out for a night on the town that has unexpected consequences in this independent ensemble drama. Larry (Bill Sage) is a record company executive who is dating Mia (Maria Zyrianova), a beautiful model several years his junior, though he's also been sleeping with Emily (Holley Fain), his personal assistant. On Emily's suggestion, Larry goes out to a trendy club to see a promising local band fronted by Angelina (Donnamarie Recco) and Leroy (Aaron Staton); the two are also a couple offstage, but their relationship is on its last legs. When not singing, Angelina serves drinks at the club, and one of her regular customers, an actor named Greg (Christian Campbell), has finally worked up the nerve to ask her out on a date. Also at the club with romance on her mind is Michelle (Paola Mendoza), who is finally meeting Jack (Michael Muhney) after weeks of chatting on an internet dating site; however, Michelle's jealous former boyfriend (Billy Lush) is keeping his eye on her. Abby (Merissa Morin) is deeply in love with her boyfriend Marc (Bill Dawes), a bartender at the club, but is surprised to learn that her friend Clarice (Frankie Shaw) also has romantic feelings for her. And Wendy (Melissa Leo), who is older than most of the bar's clientele, finds herself vying for the attentions of both Marc and the more age-appropriate Doug (Robert Clohessy). One Night was an official selection at the 2008 Sundance Film Festival.

Critic Reviews for One Night

There are no critic reviews yet for One Night. Keep checking Rotten Tomatoes for updates!

Audience Reviews for One Night

12/09/2010 (ONLINE) Not my usual but I caught the beginning of this flick which actually happened to be the ending of the story and so I watched it to see why it got to that point. I must say the performances of the actors and actresses is excellent and the characters are so interesting and real, also it has none of that "everybody gets what they want in the end" crap. This is a pretty hardcore "Chick flick" but with out the bull-crap that usually puts me off and story the telling I thought was skillfully done to enhance the flowing of the film so that it didn't begin to bore me. It had a little of every circumstance that we've might of experienced in our lives concerning relationships, whether it's breaking up, making-up or making out and I enjoyed the reality of what this story is telling. It's not always "happily ever after" though, when it's all said and done at the end of the day... we have to deal with what is real. But enjoy the moment while we are in it.