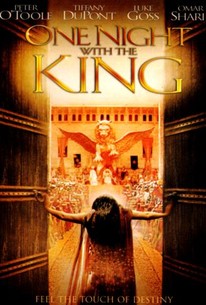 Critics Consensus: Despite its epic source matierial, One Night With the King is held back by dull storytelling and a clumsy script.

Critics Consensus: Despite its epic source matierial, One Night With the King is held back by dull storytelling and a clumsy script.

Critic Consensus: Despite its epic source matierial, One Night With the King is held back by dull storytelling and a clumsy script.

One Night With the King Photos

When a beautiful young slave girl learns that her people are about to fall victim to a horrible act of genocide, she will be forced to choose between realizing her wildest dreams or stepping into the pages of history to embrace her destiny in an epic tale of one young girl who rises from peasant to princess to claim the heart of a king. Esther was born an exquisite beauty, but her people have been enslaved by the most powerful kingdom on the planet and her parents executed before she ever had a chance to truly know them. Subsequently taken in by her kindly uncle, a royal scribe, Esther is soon spirited away to the royal palace to take her place in the king's harem. Trouble is stirring in this ancient land, however, and when the queen, Vashti, is banished by the unknowing king, palace princes scramble for a position of power the desperate king determined to live up to, and ultimately avenge the battles waged by his father long ago. Now, as the wheels of destruction are slowly set into motion, a malevolent prime minister who has fallen into favor with the king soon begins to wield a frightening amount of power by calling for the death of Esther's people. With time running out for her entire race, Esther must face her fears and be willing to lay down her life if she is to ever fully realize the plan that God has laid out for her.

David Michie
as Soldier
View All

News & Interviews for One Night With the King

View All One Night With the King News

Critic Reviews for One Night With the King

The performances are all solid, although the screenplay frequently bogs down with the complexity of palace intrigues and plots that could have been rendered more consumer-friendly.

Why another version of this oft-filmed tale?

The movie devolves into a talky, static affair featuring a cast with wildly varying accents and acting abilities.

Esther's triumph isn't because of divine intervention. It's her humanity and bravery that make her a legend, and make that One Night worth remembering, 2,500 years later.

Unfortunately [O'Toole and Sharif are] separated by five centuries, and never share a scene. For a movie with the most righteous of intentions, that's perhaps the most grievous moviemaking sins of all.

The cinematography and sets look great, but the script is a bummer. It's overlong, overwrought and overblown.

Brave heroine risks it all in biblical epic.

Less a celebration than a lively college lecture, with CGI standing in for landscapes, panoramas and a cast of thousands.

The film is an exercise in overblown and overplayed.

a welcome and honorable telling of the Purim story.

All the production money in the world isn't going to get this magnificent looking biblical clunker past the critics.

While Dupont is lovely and sweet, the script leaves her motivations largely open and she's not enough of an actress to fill in the blanks.

Audience Reviews for One Night With the King

The Biblical epic One Night With the King is a compelling story of faith and duty. A Jewish peasant girl named Esther wins the heart of King Xerxes during his search for a new queen, but when a nefarious prince named Haman plots to kill the Jewish population she must risk everything to save her people. James Callis gives an incredible performance as Haman; creating a tantalizingly evil villain that's smart and crafty. Tiffany Dupont's performance as Esther on the other hand is quite poor, and she's unable to hold her own against her co-stars. However, the production valves are extraordinarily well-done; from the costumes to the set designs, to the sweeping score, the film does a remarkable job at creating a grand, historical look and feel. A powerful tale of faith, One Night With the King is an inspiring spiritual drama.

The film generally adheres to the main plot of the Biblical narrative. However, the film adds stylistic elements not present in the Biblical story. The Jewish narrative of the relationship between Esther (Tiffany Dupont) and Ahasuerus (treated as Xerxes I of Persia in this, as in many adaptations) was not a love story, but a forced marriage in which Esther had no choice. The story presents many facets that could have happened rather than strictly sticking to biblical texts.

This was an Outstanding Movie, If you have traveled Western Europe or The Middle east, the scenes were so real, colors excellent, The Costumes were unbeleivable. This was a great movie, Do yourself a big favor get it, thank You Fox Family Video

Close to perfect, a rendition of the book of Esther. If I didnt know the story in the book I would have rated this 5 stars.

its not a bad rendition, I just didnt give it 5 stars cuz I think they missed to "portray" a few things about Esther. Still, yknow. Its a good movie :) Maybe guys would see this as " a girly/religious movie --- and we all know how overly religious, religious movies go", I would beg to differ, this has zest. Sajbel did a great job in directing this.

One Night With the King Quotes