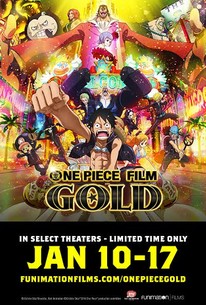 The Straw Hat pirates are hitting the big screen once again in an all-new high-flying adventure! The popular series that has captivated fans all over the world unfolds a new saga in the highly anticipated movie, One Piece Film: Gold. The glittering Gran Tesoro, a city of entertainment beyond the laws of the government, is a sanctuary for the world's most infamous pirates, Marines, and filthy rich millionaires. Drawn by dreams of hitting the jackpot, Captain Luffy and his crew sail straight for the gold. But behind the gilded curtains lies a powerful king whose deep pockets and deeper ambitions spell disaster for the Straw Hats and the New World alike.

The whole thing feels like an excellent example of its type, even if its type is adolescent fever dream.

The picture is boisterous and shouty and frequently grotesque, and it features a preponderance of scantily clad, large-breasted women, including Straw Hat pirate Nami, whose barely-there bikini top helpfully has the word "sexy" printed on it.

If you're a boy between, say, 8 and 12 and wired to the hilt on Coca-Cola, the shrill, exhausting "Gold" might be for you. But only if.

On the surface, it's a very silly comic adventure. But beneath the slapstick lies a blunt critique of economic inequality and the contemporary culture of greed.

So much plot is crammed into the film's relatively lengthy 120 minutes that it can be downright confounding trying to figure out who's a good guy and who's the villain.

One Piece Film: Gold is a pretty solid entry point for those looking to enjoy the series without having to devote hours to wading through reams of filler episodes and expository fluff.

As a total newcomer to the franchise, I was overall very captivated and charmed by One Piece Film: Gold.

This is a funny, inventive, and gorgeously animated adventure showcasing some colorful characters and a bold, original setting.

There are no featured audience reviews yet. Click the link below to see what others say about One Piece Film: Gold!