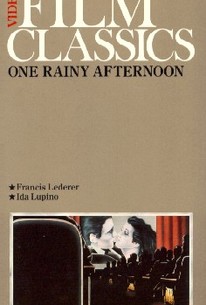 A remake of the French comedy Monsieur Sans-Gene, One Rainy Afternoon gets under way when film-actor Phillippe Martin (Francis Lederer) heads to a darkened Parisian movie theater for a romantic rendezvous with his married sweetheart Yvonne (Countess Live de Margaret). But our hero sits in the wrong seat and kisses the wrong young lady: Monique Pelerin (Ida Lupino), the daughter of a powerful publisher Joseph Cawthorn. This innocent mistake snowballs into a national scandal, fomented by the hatchet-faced president (Eily Malyon) of the Purity League, with Phillippe earning the onus of "The Kissing Monster." It all culminates in one of those zany courtroom trails which proliferated in screwball comedies of the 1930s, wherein Phillippe defends himself by insisting that it is in a Frenchman's nature to be romantic, even with perfect strangers -- and as a result he becomes an international hero! One Rainy Afternoon was the first of a handful of United Artists talkies personally produced by studio vice-president Mary Pickford.

Richard Carle
as Minister of Justice

Seger Ellis
as Singers on Screen

Margaret Warner
as Singers on Screen

Critic Reviews for One Rainy Afternoon

light and frothy from start to finish. Thanks to [the producers] and to the principals, it's well worth seeing. And thanks to Hugh Herbert, it's worth seeing twice.

Substandard screwball comedy has the silliness but lacks the humor, as its directed without an ear for zany comedy by Rowland V Lee.

Audience Reviews for One Rainy Afternoon

Mid thirties studio fodder would be completely forgotten if it didn't have Ida Lupino in one of the star parts. She's very young although starting to move away from the English Jean Harlow mold the studio tried forcing her into at first. Her voice is still high and light not having yet acquire the smoky whiskey tinge that was to come within a few years. She and the forgotten Lederer make an attractive couple but this is a minor romantic comedy nothing more.