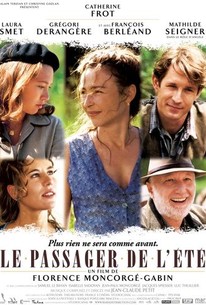 A woman finds a new and unexpected romance with a younger man in this romantic drama set in France in 1950. Monique (Catherine Frot) is a woman in her late forties who has been left to run the family farm after her ne'er do well husband abandoned her during the war. Monique does nearly all the labor on the farm with the help of her teenage son Paulo (Jean-Pierre Moncorge), while her daughter Jeanne (Laura Smet), the local schoolmarm, lives nearby and helps Monique care for Prudence (Isabelle Sadoyan), her elderly mother-in-law. One day, a handsome drifter, Joseph (Gregori Derangere), happens by looking for work; he has experience in helping to run a farm, so Monique makes him the new hired hand. Joseph's presence causes no small stir among the local women, and flirty Angele (Mathilde Seigner) wastes no time letting Joseph know that's she's available and interested. However, Jeanne is also quite taken with the rugged but charming laborer, and while Monique has an on-again off-again romance with Maurice (Francois Berleand), a local politician who holds the deed to the farm, she's hardly immune to Joseph's spell, and finds herself a rival with her daughter for the affections of a man nearly half her age. Le Passager de l'ete (aka One Summer) was the first feature film from director Florence Moncorge-Gabin, daughter of the legendary French actor Jean Gabin.

Critic Reviews for One Summer

The down-to-earth story, with a pacing more akin to classical French literature than a modern film, will probably only inspire upscale female audiences.

There are no featured reviews for One Summer at this time.