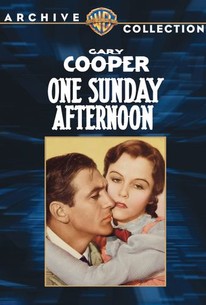 Gary Cooper is a small town dentist dissatisfied with his lot. Though married to the lovely and affectionate Frances Fuller, Cooper still carries a torch for his former sweetheart, Fay Wray. Years earlier, Cooper had lost Wray to his old friend Neil Hamilton, and is consumed with the desire to get even with his rival. The now-wealthy Hamilton comes to visit Cooper, with Wray in tow. Cooper then seeks to rekindle his old romance. Based on the stage play by James Hagan (which starred Lloyd Nolan on Broadway), One Sunday Afternoon was remade with James Cagney as Strawberry Blonde (41), then reworked as a musical with Dennis Morgan under its original title in 1948.

Critic Reviews for One Sunday Afternoon

Audience Reviews for One Sunday Afternoon

There are no featured audience reviews yet. Click the link below to see what others say about One Sunday Afternoon!