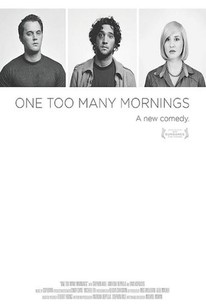 One Too Many Mornings Photos

A guy tries to help out his heartbroken best friend by teaching him the fine art of being a drunken slob in this independent comedy. Fisher (Stephen Hale) is a man in his late twenties who has a job as a caretaker and youth soccer coach at a church in Southern California. While the money isn't great, he gets to live at the church rent-free and gets occasional free meals, so he can spend his abundant free time swilling cheap booze and picking up older women. Fisher's routine is thrown a bit out of whack when his buddy Pete (Anthony Deptula) shows up unannounced for his first visit in years. Pete is deeply depressed after discovering his longtime girlfriend Rudy (Tina Kapousis) has been seeing someone else, and Fisher tries to mentor him in the virtues of binge drinking, chasing "cougars" and subsisting on junk food. However, Fisher's best efforts don't make Pete much happier, and circumstances take an unexpected turn when Rudy shows up and informs Fisher that her side of the story is quite different from what Pete has to say. The first feature film from director Michael Mohan, One Too Many Mornings was an official selection at the 2010 Sundance Film Festival. ~ Mark Deming, Rovi

Daniel Casey
as Nitro
View All

Critic Reviews for One Too Many Mornings

There are no critic reviews yet for One Too Many Mornings. Keep checking Rotten Tomatoes for updates!

Audience Reviews for One Too Many Mornings

There are no featured audience reviews yet. Click the link below to see what others say about One Too Many Mornings!

One Too Many Mornings Quotes