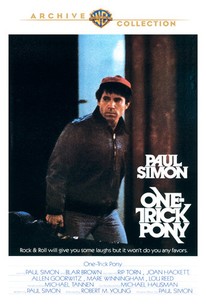 The struggle of a has-been singer to work his way back up the charts is the focus of this drama by Robert M. Young with screenplay and music by Paul Simon. Simon plays Jonah, a once-popular singer who now opens for punk rock bands. In the ten years since he had a hit song, Jonah's wife has divorced him, but he still sees his young son as often as he can. With his record company on his back to come up with something that sells, Jonah begins to compromise his own talent when he listens to the advice of a trendy producer. Whether or not he can straighten out his personal life and steer his own ship may depend on his ability to trust his own judgment and adjust to the changing times.

Kate Pierson
as Member of the B-52's

John Sebastian
as Member of the Lovin' Spoonful

Tiny Tim
as Himself

Joe Smith
as Narrator at Convention

One-Trick Pony offers a satirical look at the music business.

There are no featured reviews for One-Trick Pony at this time.