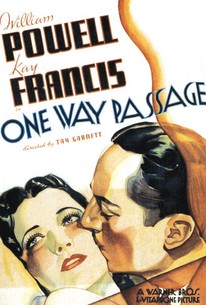 William Powell plays a condemned murderer who is being transported from Hong Kong to San Quentin by way of a luxury liner. Also on board is the lovely Kay Francis, who is suffering from a fatal heart condition. The sympathetic detective (Warren Hymer) escorting Powell allows the prisoner to roam the decks without handcuffs, an opportunity Powell exploits by arranging an escape with two of his old cronies (Frank McHugh and Aline MacMahon). But when he meets Francis, Powell falls in love. Francis is equally smitten, and the two conduct an exquisite shipboard affair, neither telling the other of their impending doom. Powell makes his escape, but is halted in mid-flight when Francis has a heart attack. He rushes Francis back on board ship to her doctor, knowing full well that this will mean his recapture. As they bid goodbye, Powell and Francis promise to meet again one year later in Agua Caliente--a rendezvous that neither will survive to keep. A year passes. At a bar in Agua Caliente, two cocktail glasses suddenly shatter, as if having been joined in a toast by unseen hands. One Way Passage was remade in 1940 as 'Til We Meet Again.

Roscoe Karns
as Bartender on Ship

Critic Reviews for One Way Passage

Tragic romance with a classic premise.

A beautiful little movie that has weathered its 80 years effortlessly.

This is a breezy story.

Audience Reviews for One Way Passage

Beautiful and touching, 'One Way Passage' is filled with dreamy eyes and an intensity of feeling. William Powell plays a man who bumps into Kay Francis in a bar in Hong Kong, and they're instantly drawn to one another. They find each other again on an ocean liner bound for San Francisco, each not knowing a terrible secret about the other, and their love burns all the brighter knowing that it may not last. Powell and Francis are both brilliant and utterly charming, and director Tay Garnett does an excellent job of telling the story and filling his scenes with nice little touches. He also gives us some modern camera work, and while the film has some fantastic slang from years gone by, it also feels ahead of its time, and timeless. Brilliant ending too.

what a great movie. the plot may sound ridiculous but it works like a charm. tragedy should always be this much fun. the supporting characters deserve special mention and i particularly enjoyed aline macmahon as the phony countess. 'don't smudge my bangs!' priceless

William Powell and Kay Francis are well matched in this ultra romantic but somewhat preposterous weepie. Frank McHugh and particularly Aline MacMahon are a lot of fun in secondary roles. The brevity of the running time keeps the story moving along.

Great film about a couple of people who's futures do not look good, and they meet on a boat from Hong Kong to San Francisco. Just a great story, great supporting cast. This is one of those forgotten movies that you wonder why more people don't talk about more. Of course it stars the genius that was William Powell, so I am a little biased.