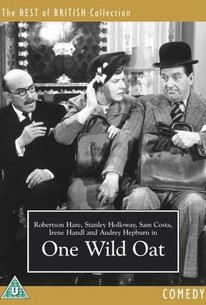 Two of the British film industry's most potent comic talents appear in One Wild Oat. Robertson Hare heads the cast as distinguished barrister Humphrey Proudfoot, whose daughter Cherrie (June Sylvaine) is about to marry. Unfortunately, Cherrie's fiancé is Fred Gilbey (Andrew Crawford), the son of notorious philanderer Alfred Gilbey (Stanley Holloway). Fearing that Fred intends to follow in Alfred's footsteps (so to speak), Proudfoot does his best to undermine the romance. Gilbey turns the tables by threatening to reveal Proudfoot's own past indiscretions (including one that Gilbey has completely fabricated). It is up to the wives of the two old antagonists to solve matters and pave the way for a happy ending. One Wild Oat was co-adapted by Vernon Sylvaine from his own stage farce. ~ Hal Erickson, Rovi

Gwen Cherrill
as Audrey Cuttle No. I

Irene Handl
as Audrey Cuttle No. 2

Critic Reviews for One Wild Oat

There are no critic reviews yet for One Wild Oat . Keep checking Rotten Tomatoes for updates!

There are no featured reviews for One Wild Oat at this time.