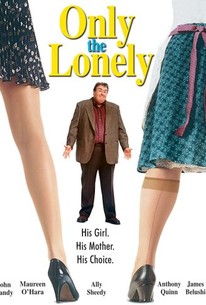 Only the Lonely Photos

Writer-director Chris Columbus mines Paddy Chaveysky's Marty for this bittersweet comedy about a lonely 38-year old Chicago cop dominated by his harridan mother. Danny Muldoon (John Candy), in spite of being well known and well liked in his neighborhood, still lives at home with his mother Rose (Maureen O'Hara, returning to the screen after a twenty year absence) and spends most of his time worrying about her. One night at the local Irish bar, he meets the shy Theresa Luna (Ally Sheedy), whose father is the local funeral director, and both Danny and Theresa immediately fall in love. The only obstacle to their happiness is the jaded opinions of Danny's friends. Rose, in particular, launches into a bigoted Italian salvo that intimidates Danny, making it difficult for him to continue the relationship.

Marlon A. Morris
as Cop Friend

Critic Reviews for Only the Lonely

Columbus... enhances the comedic bits with commentary on the human condition: the emergence of male-female love; the silver cord between mother and son; the plight of aging single men whose only ties are their pub companions.

A pretty easy ride, almost entirely because of John Candy and the miraculous casting of Maureen O'Hara.

Orchestrates a peaceful stream of gags and one-liners while piecing together a puzzle of broken hearts...one of Columbus's best films, and easily ranks as Candy's most dimensional performance. He's a joy to watch here.

As a romance, Only the Lonely undoubtedly succeeds.

One of Candy's sweetest (and most underappreciated) films

Audience Reviews for Only the Lonely

One of John Candy's best characters.

It's a cute movie, with cute actors and a cute plot. The wife, Ally Sheedy was annoying as hell and had more mom-issues than I've ever seen. How anyone couldn't love Maureen O'Hara is beyond me.

Funny movie. Bout a guy who finds love and learns to let his mother take a backseat to his life.

A wonderfully light RomCom that stands as one of the best tributes to John Candy (alongside Uncle Buck). Though, this is a comedy, it still allows Candy to show his true acting skills, and many of the choicest comedy moments go to Maureen O'Hara as Candy's mother, who almost steals the film. It is a sad trait in Hollywood theory which appears to dictate that comediens can't do serious acting and so should never be given serious roles, yet many have proved this to be wrong. John Candy himself proved it in JKF, Dan Aykroyd did in Driving Miss Daisy, and Robin Williams has done it on numerous occasions.

Only the Lonely Quotes