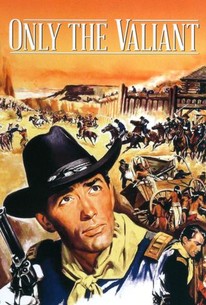 Only the Valiant Photos

Originally conceived as a Gary Cooper western, Only the Valiant reached the screen with Gregory Peck in the lead. Peck plays Richard Lance, a strictly by-the-book Army captain. Though hated by his men, Lance is respected for his military know-how. This comes in very handy when Lance and a detachment of troops attempt to reach, and then hold, an unguarded Army garrison in the middle of Apache Country. Among the film's he-man contingent are Ward Bond, Gig Young, Lon Chaney Jr., Neville Brand, Jeff Corey and Steve Brodie, all delivering topnotch performances. The nominal leading lady is Barbara Payton, whose real-life tragedies were far more dramatic than any film she appeared in. Only the Valiant was based on a novel by Charles Marquis Warren.

Critic Reviews for Only the Valiant

Gregory Peck was a replacement for Gary Cooper, who never liked the film but nevertheless his grand performance is the main reason the film is any good.

Out of the 53 theatrical features Gregory Peck made over a 47-year span, the late, great actor always considered the worst to be Only the Valiant ... But this middling Western isn't awful so much as it's awfully indifferent.

Audience Reviews for Only the Valiant

Out in New Mexico territory the Apaches are uprising again, their leader promising death for the whites. Against this torrential horde is Gregory Peck and a ragtag group of men, a group that hates him for being so smugly self-righteous. Who will get to kill him, the Apaches or his own men? This oater finds its legs under the saddleship of its worthy cast of character actors who step up and deliver the stereotypes with elan, elevating what would be a rather tepid affair little better than a television western. Ward Bond, Lon Chaney Jr. and Neville Brand are the usual standouts.

I only choose to watch this because Barbara Payton was in it. This film, released in 1951, has the usual elements typical of the westerns released during the 50's; the cavalry needing to protect the territory from a murderous band of Indians, an officer determined to see that task through, and the men with him with various character flaws that he has to merge together into a cohesive unit. This small band must hold on to a fort located close to the Indian village until reinforcements arrive. The Indians know, all to well, that the small band is undermanned, and could be wiped out before the help comes. One major difference for this film, "Only the Valiant", is that it attempts to play out the usual storyline, but at the same time, deliver the message that duty is a paramount concern to be shared by all, even if they don't accept that charge. Gregory Peck embodies the tight-lipped captain of the troop that has to prevent the Indians from breaking out into the territory. The troopers that he takes with him to the small outpost are the dregs of the troop at the fort; they, in turn, have gripes or weaknesses that cause them to wonder if the captain hasn't taken them out because of their general lack of devotion to a cause. Eventually, the captain and the small band confront the hostiles, and at the same time, each confronts his own flaw. The cast includes western stalwarts such as Ward Bond, Gig Young, Neville Brand, Lon Chaney, Jr., and Warner Anderson. A sleeper of a film, and a good solid western for fans of this genre. 5 Stars 2=2=13

Only the Valiant Quotes