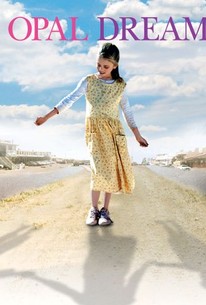 When the imaginary friends of a young girl living in Australia's Lightning Ridge opal-mining town go missing, the inexplicable illness that befalls her soon prompts her brother to organize a desperate search for his sister's transparent pals in director Peter Cattaneo's adaptation of Ben Rice's popular children's novella. Kellyanne is a young girl with a vivid imagination and two invisible friends named Pobby and Dingan. Though her brother, Ashmol, was never the affectionate type, his concern at seeing his little sister become ill after Pobby and Dingan disappear quickly sets into motion an incredible journey that will serve as a transformative rite of passage for not just Ashmol, but the whole town of Lightning Ridge as well. ~ Jason Buchanan, Rovi

David Field
as Jack the Quack

Andy Anderson
as Nichols
View All

Opal Dream might be one of those movies that has to catch a viewer in the right mood, or be greeted with scorn.

The film squeezes out its feel-good messages like toothpaste from a tube.

Although Opal Dream marks a pleasing departure from the conventions of the British comedy -- it's based on a children's book and set in the Australian outback -- it's disappointingly small in scope.

With its lessons of faith, family loyalty and the power of the imagination, this is one of the rare non-animated films parents can take their children to see.

Sophisticated cine philes aren't likely to go ga-ga over this one, but Opal Dream is a worthwhile family film, graced with an ambivalent, bittersweet ending and just the right touch of cinematic poetry turning on the gemstone in its title.

It's tear-jerker material but ends up being quite touching, and it's a good choice for family viewing.

Saccharine sweet to the core, the heartfelt story and faith in the power of imagination and love will sparkle like an opal glistening in the Outback sun long after the curtain falls.

Unusual Australian drama has a few moments of violence.

What opens as a delightful kid-friendly drama closes as a stumbly, manipulative yawner.

There are times when cinematic heart-tugging takes on the character of a frontal assault. Opal Dream is one of them.

The film succeeds because of the great lengths to which Ashmol goes to bring her peace of mind.

A family-oriented film that doesn't merely play lip-service to the power of imagination -- it actually demonstrates some of its own.

There are no featured audience reviews yet. Click the link below to see what others say about Opal Dream!