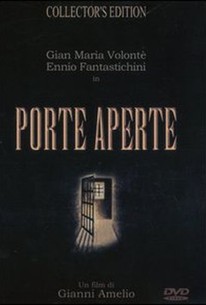 Set during the Mussolini years, Open Doors stars Gian Maria Volonte as an old-line judge. Volonte tries to remain faithful to the letter of the law, despite the "improvements" made by the Fascists. His insistence upon justice over dogma results in government reprimands, and ultimately poses a threat to Volonte's well-being. The honesty vs. corruption theme transcends the film's period settings, resulting in an allegorical masterpiece that has significance in any country, any time. Open Doors was a nominee for the "best foreign picture" Academy Award.

Mimmo Salvo
as The Priest

Great drama that I think is accentuated by its placement within the Fascist area of Italian history which has been somewhat avoided in film..or at least the films that I have seen. Capital punishment debated under extreme circumstances.