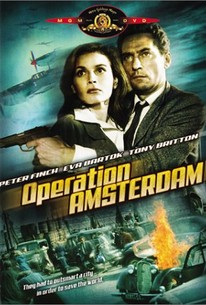 One of the covert operations at the beginning of World War II is enacted in this fast-paced docudrama about a government-approved diamond heist. A Major from the British army (Tony Britton) joins up with a Dutch diamond expert (Alexander Knox) and another adventurous Dutchman (Peter Finch) to steal a fortune in diamonds from a bank vault in Amsterdam before the Nazis completely close off the city. The trio are launched under the covering fire of a British battleship in the harbor and then chauffeured into Amsterdam by Anna (Eva Bartok), one of many people they encounter who could be either friend or foe. There is no time to waste in emptying the bank vault because it is estimated that the city will be overrun by the Nazi army in just fourteen hours. Meanwhile, the war is intensifying all around them, and the Nazi soldiers already on patrol are a continual threat. ~ Eleanor Mannikka, Rovi

As a film, this true story becomes an exciting cloak-and-dagger adventure.

There are no featured reviews for Operation Amsterdam at this time.