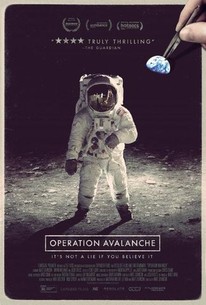 In 1967, during the height of the Cold War, two young CIA agents (Matt Johnson and Owen Williams) go undercover at NASA to investigate a possible Russian mole. In disguise as documentary filmmakers, they tap phones and break into offices while purporting to learn more about the Apollo project. But when they end up uncovering a shocking NASA secret - and a major government cover-up - they decide to embark on a new mission that may put their own lives at risk.

John F. Kennedy
as Self
View All

"Operation Avalanche" is an inventive grab-bag of a film, a movie about making a movie that no one was supposed to know was a movie at all.

That's one small step for Apollo 11 hoaxers, one giant leap for Matt Johnson.

Part mockumentary, party black comedy, part action-adventure and part cinematic dare, the movie is a bizarre, engrossing creation that will leave audiences either delighted or baffled, though never bored.

A send-up like this works far better for a few minutes on the small screen (see Documentary! or Drunk History); at feature length it becomes a stylistic exercise, like a kid mugging for the camera through an Instagram filter.

Ingeniously using his low budget to address his ambitions, Johnson has directed, co-written (and starred in) a unique science-fiction film.

A bright idea can only take a movie so far. Mission not accomplished.

Operation Avalanche is the reason I dislike found footage homemade style films. It's sloppy, not interesting enough, and boring. It is not worth your time or money. Skip it all together.

In a strange way, Operation Avalanche is a film that shouldn't even exist, yet here it is, defying the odds and telling a compelling story about a fake moon landing in a mostly believable manner.

It's a minor film, just as it needs to be, and it really is its very own beast. There's nothing else quite like it.

Engagement with the audience is relegated mostly to nods and winks, with a chuckle here and there, rather than crafting a thought-provoking story with compelling characters.

Funny, exciting and wildly entertaining, Operation Avalanche is another big win for Matt Johnson, a director who clearly has a promising future ahead of him.

Snowballs itself into a black hole of boredom.

There are no featured audience reviews yet. Click the link below to see what others say about Operation Avalanche!