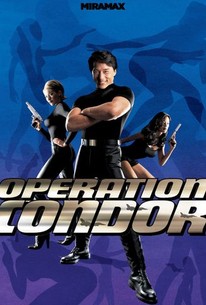 Jackie Chan returns to his adventuring Indiana Jones-esque Asian Hawk character with this rollicking action-adventure yarn. In this go-around, Jackie (aka the Asian Hawk) is looking for 240 tons of gold stolen by the Nazis and buried beneath the Sahara. Along the way, he teams up with a stuck-up archeologist named Ada (Carol Cheng), a Japanese tourist named Momoko (Shoko Ikeda), and Elsa (Eva Cobo De Garcia), the granddaughter of the Nazi captain who originally hid the booty. Opposing them is various groups of blackguards and mercenaries along with Adolf (Aldo Sanbrell) -- the last surviving soldier from the original company -- who is hell-bent on getting the gold himself. Soon, two of Jackie's companions find themselves sold into slavery while Jackie battles the baddies in a massive WWII-era wind tunnel. This film ran 100 percent over Chan's already lavish -- by Hong Kong standards -- budget, making it one of the most expensive films that industry has ever produced.

Ken Goodman
as Adolf's Guard No. 1

Gregory Tartaglia
as Adolf's Guard No. 2

Lyn Percival
as Adolf's Guard No. 3

Bruce Fontaine
as Adolf's Guard No. 4

Wayne Archer
as Adolf's Guard No. 5

Brandon Charles
as Adolf's Guard No. 6

Peter Klimenko
as Adolf's Guard No. 8

Christian Perrochaud
as Adolf's Guard No. 9

Mark King
as Duke's Guard No. 1

Bryan Baker
as Duke's Guard No. 2

Charles Yeomans
as Man with Stolen Clothes
View All

[Jackie Chan's] goal is to recover stolen Nazi gold, but his real goal is to wow us, which he does more often than not.

There's a by-the-numbers feel to much of the action.

The point of the movie is the fight scenes, and they're impressive, as is the car chase, one of the funniest, most inventive in recent memory.

A laughably dubbed, awkwardly plotted variation on Raiders of the Lost Ark.

Neither the best nor the worst, Operation Condor makes for a slap-happy medium

Overall, Armour of God is a standout among Chan's pre-Hollywood projects.

With its reliable combination of humor and martial arts, this is one of Jackie Chan's most entertaining projects.

Lots of fun from start to finish

For those of who are not fans, its laughs will be forgotten minutes after we exit the theater.

Unlike First Strike, Supercop, and Rumble in the Bronx, Condor is less about the amazing things Jackie can do than the amazing places they have him doing things in.

Jackie Chan steps into both the starring role and director's chair for Operation Condor.

Set in various locations, the story is straight forward, yet entertaining for a film that is heavy on the action. The run time is nearly 105 minutes, but it feels much faster than that. This is due to some minor choppiness, but more so to the playful nature of the story.

The action is a plenty and the stunt work is phenomenal with a few replay instances thrown in. There are a variety of segments and scenarios, in which Chan is able to blend his martial arts and stunts into. These are definitely the highlight of the film.

There isn't much in the way of serious acting, and this isn't a problem. The characters are very lively and humorous with their facial expressions, dialogue, and actions. Jackie Chan excels with his character, and the likes of Carol Cheng, Eva Cobo, and Shoko Ikeda end up as a wonderful trio of women to watch.

A very good martial arts with some great fights and plenty of humour to. One of Jackie Chan's best earlier films.

One of Jackies more eclectic offerings; it covers ground from Crocodile Dundee-esque comedy to Indiana Jones to James Bond spy territory. Fun, but silly even by Chan's standards, but it's great to see Jackie kicking some Nazi ass. But DUBBED!!