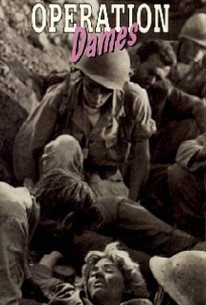 Billed to follow Tank Commandos in a double feature, this light-weight wartime saga relies heavily on showing enough skin, specifically that of USO entertainer Lorry Evering (Eve Meyer), to keep the drive-in folks awake. The premise is that a USO troupe has been caught behind enemy lines during the Korean War and suffers through their captivity along with the soldiers and the sergeant (Chuck Henderson) who has to keep them all together. The group is forced to march through difficult terrain under trying circumstances, as the sergeant and his men face each new situation as it comes.

There are no critic reviews yet for Operation Dames. Keep checking Rotten Tomatoes for updates!

There are no featured reviews for Operation Dames at this time.