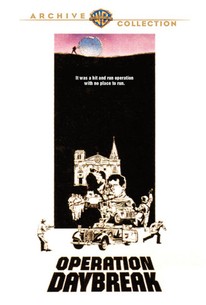 Also titled The Price of Freedom, Operation Daybreak is a retelling of the terrible consequences attending the assassination of Nazi-occupation leader Richard Heydrich. When Heydrich puts all of Czechoslovakia under his thumb, a group of Czech expatriates parachute into their homeland to kill the man known as "The Hangman." They succeed, and in retaliation the Nazis wipe the tiny Czech village of Lidice off the map, killing its male residents and carting off its women and children to concentration camps. For the purposes of the plot, assassins Timothy Bottoms and Martin Shaw survive the massacre, albeit only briefly. The Heydrich/Lidice tragedy was previously dramatized in two wartime films, Hangmen Also Die (1943) and Hitler's Madman (1943). Operation Daybreak was adapted from Seven Men at Daybreak, a novel by Alan Burgess. ~ Hal Erickson, Rovi

Ronald Radd
as Her Husband

Neil McCarthy
as Man at Quarry

There are no critic reviews yet for Operation: Daybreak. Keep checking Rotten Tomatoes for updates!

There are no featured reviews for Operation: Daybreak at this time.