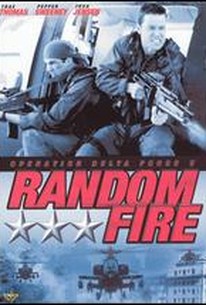 Operation Delta Force II: Mayday director Yossi Wein makes his return to the franchise with this fifth installment of the action series. This time around, the elite task force is assigned to handle a Middle-Eastern terrorist mastermind who is using mind-control techniques to create an army of willing suicide bombers. It's a race against time to prevent any more death and destruction, but when the bad guy gets his malevolent paws on soldiers from the Delta Force, the stakes get even higher.

There are no critic reviews yet for Operation Delta Force 5: Random Fire. Keep checking Rotten Tomatoes for updates!

There are no featured reviews for Operation Delta Force 5: Random Fire at this time.