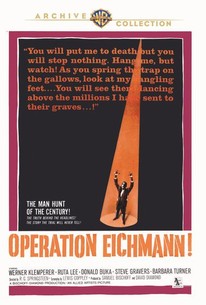 Released about five weeks before the Adolf Eichmann trial began in Jerusalem on April 11, 1961, this docudrama by director R.G. Springsteen was quickly dashed together to take advantage of the trial, and it shows. Overplaying Eichmann's venality and lacking any depth in characterization, the story unfolds in several large segments. Eichmann (played by Werner Klemperer), as head of Dept. IV, B4 or "Jewish affairs/evacuation affairs, personally ordered, or watched, or supervised the extermination of Jews in Germany and the nations under its occupying forces. These years are shown in the first part of the film; the second half deals with Eichmann's escape from an American POW camp, his four years under cover in Germany, aided by an association of Nazi SS members (ODESSA), his escape in 1950 to Argentina through Italy, and his capture on May 11, 1960. ~ Eleanor Mannikka, Rovi

Jimmy Baird
as David as a Boy

Debbie Cannon
as Sara as a Girl

Jackie Russo
as Jacob as a Boy

There are no critic reviews yet for Operation Eichmann. Keep checking Rotten Tomatoes for updates!

There are no featured reviews for Operation Eichmann at this time.