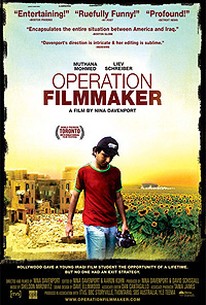 Touched by the plight of an aspiring Iraqi filmmaker whose dreams of working in Hollywood seemed to fall with Baghdad, American filmmaker Liev Schreiber invites the ambitious wannabe director to intern on Everything Is Illuminated, to unexpected results. In 2004, just one year after the United States launched a devastating attack on Baghdad, MTV ran a story about a 25-year-old Iraqi film student named Muthana Mohmed, who remained determined not to let the strife that consumed his country consume his dreams as well. At the time, American actor Schreiber was preparing to make his directorial debut with the film Everything Is Illuminated. After seeing the documentary on television, Schreiber was consumed by guilt for having so many amazing opportunities in the film industry and determined to give Mohmed the chance of a lifetime by inviting him to join the production of Everything Is Illuminated in the Czech Republic. Common wisdom dictates that "the road to hell is paved with good intentions," however, and as Mohmed attempted to balance the complications of living away from home for the first time with the cultural issues that arise while working with an all-American film crew, the situation quickly began to deteriorate.

Nina Davenport's unapologetically cunning doc exceeds the sum of its parts to become almost unmanageably allegorical and even an indictment of its own shock-and-awe premise.

If learning about other cultures shows that we're all basically alike, Operation Filmmaker is a reminder that foreign countries have their own share of nitwits, too.

What might have been a vanity project emerges as a surprisingly complicated morality tale.

Everyone here comes out smelling bad -- that's why the film's so good.

This gut punch of a documentary will knock you for a loop.

An exit strategy in Iraq? This self-aware study shows how hard it'll be.

An outrageous, fascinating study of the Hollywoodization of one man in progress.

What the film really spotlights is a cultural clash violently, awkwardly resisting the tenuous unifying powers of art. The Westerners -- including Davenport -- see in Muthana the protagonist.

Particularly fascinating is the way in which it this documentary examines the filmmaker's relationship to the film's subject, and the role documentary filmmakers play in shaping their subjects' futures.

The antagonism between filmmaker and subject reminds us that reality is never a passive still life, but a volatile entity with its own ideas on how it is to be represented.

Davenport focuses deep on the Hollywood do-gooder mentality and her own complicity in treating Mohmed as a symbol of the war and not as a flawed person.

Fascinating doc on a fledgling filmmaker squandering opportunity and stranded by global politics.