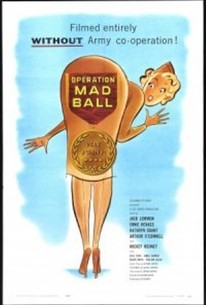 In this frantic service comedy, a group of bored-to-tears American GI's stationed at a medical facility in France would like nothing more than to have a big party to let off steam -- except for the possibility of having a big party with some of the nurses they work with. However, it seems that the nurses are officers and the GI's are enlisted men, which means the Army forbids them to socialize, and Capt. Locke (Ernie Kovacs), the camp's Commanding Officer, is not a man to bend the rules. But Private Hogan (Jack Lemmon) is not the sort of guy to let the rules get in the way of a good time, and with the help of Yancy Skibo (Mickey Rooney), a sergeant with a talent for scaring up needed supplies, and Mme. LaFour (Jeanne Manet), a local hotel manager with a soft spot for making money off American servicemen, Hogan hatches a plan to make his dream a reality. Hogan's lady friend, Lt. Betty Bixby (Kathryn Grant), isn't quite as convinced as her beau on the potential success of this scheme. Operation Mad Ball was the first directorial effort from former actor Richard Quine, and afforded Jack Lemmon his first starring role; Blake Edwards also contributed to the screenplay.

This fast and lively army comedy deserves a further commendation here, despite a few rather gruesome bits in a morgue. Jack Lemmon, Kathryn Grant and TV's Ernie Kovacs are amusingly on hand.

Strictly pedestrian effort despite cast of talented actors who have all made much better films then this. Indifferently directed and it just sort of ends without a real finish.