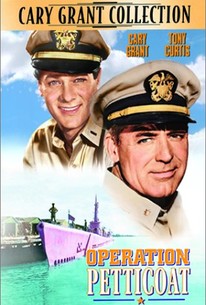 Rear Admiral Matt Sherman (Cary Grant) visits the submarine Sea Tiger on the morning of its decommissioning and reminisces about his time as the first commander of the boat, in 1941. Three days after Pearl Harbor, the sub is damaged during an enemy air raid in the Philippines; rather than abandoning her, Sherman and his chiefs refloat the boat. He's forced to accept the services of Lt. (jg) Nick Holden (Tony Curtis), who has no sea experience. Sherman appoints Holden -- a born conniver, deal-maker, and scrounger (his motto: "In confusion, there is profit") -- as supply officer, and through a series of burglaries and petty thefts he gets the Sea Tiger seaworthy again. Up to this point, the movie is an increasingly amusing service comedy, akin to the lighter moments of Mr. Roberts, running on Grant's wry exasperation and Curtis's cool arrogance, coupled with Arthur O'Connell's periodic sardonic yet optimistic jabs at their situation and Gavin MacLeod's fidgety nervousness. The Sea Tiger puts to sea ahead of the Japanese with a quintet of stranded army nurses aboard. The film shifts to a new level of humor as the officers and crew try to cope with living in close quarters with five attractive women in their midst. Grant gives a very witty performance as a man who is both exasperated by the situation he is in, having to adjust his masculinity to keep it from clashing with the feminine sensibilities of his guests, and also trying to control the mating urges of his men, starting with Holden, who can't stay away from Lt. Duran (Dina Merrill). Complicating matters more is Grant's awareness that the Sea Tiger is a "virgin" -- she has never engaged the enemy, but when they finally do, the accident-prone Lt. Crandall (Joan O'Brien) causes their torpedo to miss a tanker and sink a truck (probably the funniest sight gag in the movie). The boat also gets an accidental coat of pink paint when their supply of red and white runs low, and ends up carrying several Filipino families -- including two pregnant women. Since neither the Japanese nor the Americans officially has a pink submarine, the Sea Tiger ends uphunted by both sides and come under attack by an American destroyer. That's where the women's presence becomes a godsend. The movie ends 18 years later, with Holden a serious career navy man and responsible father, married to Duran, and Grant married to Crandall, who is as accident prone as ever.

Blake Edwards directs with his customary wit, breeziness, and acute sense of pacing.

Operation Petticoat has no more weight than a sackful of feathers, but it has a lot of laughs.

Not unpleasant, but the situations (including the inevitable invasion of women aboard the sub) are horribly familiar, and the dialogue none too inspired.

While I think Operation Petticoat has a number of issues - it's too long, overstuffed, and rather buttoned down - I still respect as it a piece of cinematic history.

There's a distinct lack of forward momentum plaguing Operation Petticoat, which takes forever to get going, and even then only moves in fits and starts, plot-wise.

Without a true plot to speak of, you really watch the film for the comic set ups that all have fairly quick payoffs.

With shining, contarsting turns from Cary Grant and Tony Curtis, Blake Edwards's slick and funny military comedy was one of 1959's most popular films and one of Grant's biggest commercial hits in a long and brilliant career.

The plot of this movie is pretty silly obviously, and the movie is goofy and funny some of the time, but overall it's not that good.

A lot of good shtick.

Another enjoyable WWII comedy from Cary Grant, and Tony Curtis provides some able support as a hustler who turns his now bright pink submarine into a refugee camp for the inevitable romantic interest. Formulaic but fun.

if i'm not mistaken this film was made shortly after mr. curtis' stint as cary's tongue-in-cheek doppelganger in "some like in hot", so this should've been a hoot if only to see if any sparks fly between the two...but it doesn't. too bad, but still a fun film