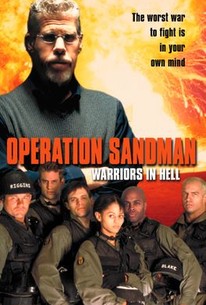 At a secret military base in the American desert, Dr. Harlan Jessup (Ron Perlman) is charge of the experimental "Operation Sandman", in which volunteer soldiers are injected with a new serum that will allow them to operate without sleep for days at a time. Led by senior NCO "Gunny" Riggins (Richard Tyson), the volunteers are trained in Virtual Reality scenarios pitting them against computer-generated terrorist. Midway through the three-week experiment, Captain Jean Farrell (Mary B. Ward) of Psy-Ops arrives to check out the volunteers and, hopefully, give them a clean bill of health so that funding for Operation Sandman will continue. Unfortunately, a few of the volunteers have been experiencing bizarre and terrifying side effects, which Jessup tries to sweep under the rug. But Jean cannot ignore the fact that on at least one occasion, a soldier has been killed by a weapon which doesn't exist! (Virtual Reality. Remember That. Virtual Reality. Real Important. Virtual Reality. Vital to the Plot. Virtual Reality.) When the made-for-TV Operation Sandman premiered on February 11, 2000, the UPN network heavily promoted the appearance of pro wrestler Hardcore Holly--who is bumped off in the first reel!

Mary B. Ward
as Jean

Michael Woolson
as Chaney
View All

There are no critic reviews yet for Operation Sandman: Warriors in Hell. Keep checking Rotten Tomatoes for updates!

There are no featured reviews for Operation Sandman: Warriors in Hell at this time.