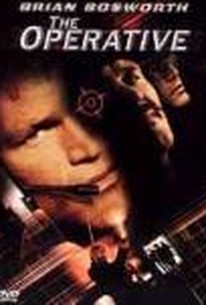 Former football star Brian Bosworth stars in this action thriller as Alex Carville, a CIA agent who, while on assignment in Russia shortly before the fall of the Soviet Union, is captured by KGB forces and placed in a mental hospital. Eleven years later, Carville is given a chance to earn his freedom: Felix Grady, an eccentric multimillionaire from Texas who bears a striking resemblance to Carville (and is also played by Bosworth), has bought an extremely valuable painting, and Carville's keepers offer to smuggle him back to the United States if he's willing to pose as Grady, pick up the painting, and hand it over to Russian agents in the United States. Carville agrees, but things don't go quite as expected -- while Carville is getting the painting, the real Felix Grady shows up, and things quickly turn violent , with Carville trying to escape both from the Russians and the police. The Operative also stars Teryl Rothery and Bob Dawson.

John B. Lowe
as Det. Delaney

Critic Reviews for The Operative

There are no critic reviews yet for The Operative. Keep checking Rotten Tomatoes for updates!

There are no featured reviews for The Operative at this time.