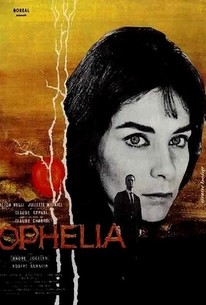 In this curious and inventive drama, director and co-writer Claude Chabrol purloins the Hamlet story from a certain Elizabethan bard, and has his characters move along the same plot outlines. Yvan (Andre Jocelyn) is overcome by grief when his father, a noted businessman, dies and is buried in their small town. Yvan's anger boils up as he watches his mother flirt with his father's brother, and he only feels worse when the two get married. The small-minded, gossiping townspeople carry on behind his back and one day, when Yvan sees a theater marquee advertising "Hamlet" he decides to set out proving that his mother and his father's brother connived to poison his father. ~ Eleanor Mannikka, Rovi

Jean-Marie Arnoux
as Guard
View All

never really catches on, which renders it a particularly dim shadow of the great work off of which it is playing

There are no featured reviews for Ophélia at this time.