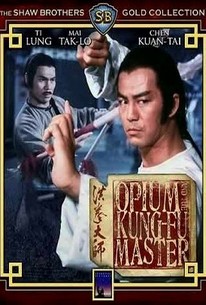 Celebrated kung-fu choreographer Tang Chia takes the helm for this effecting Shaw Brothers production concerning an opium-addicted martial artist who quits cold turkey in order to save his village from certain destruction. As the leader of the Ten Kwangtung Tigers, Tieh Chiao-san (Ti Lung) was one of the most respected martial artists in the land. But then Tieh fell victim to opium, the powerfully addictive narcotic that put a stranglehold on China. As Tieh languishes in an opium haze, a powerful gang spreads chaos throughout his hometown. Realizing that the only hope for his fellow countrymen is to stand up to these thugs, Tieh attempts to shake his addiction long enough to teach these gangsters a painful lesson. ~ Jason Buchanan, Rovi

A solid period piece based on a real martial arts master and his break with addiction...

There are no featured audience reviews yet. Click the link below to see what others say about Opium and the Kung Fu Master (Master of the Hung Clan)(Lightning Fists of Shaolin)(Hung kuen dai see!