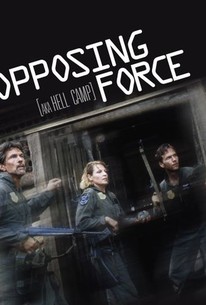 US air force lieutenant Lisa Echhorn is determined to prove her mettle by taking a grueling escape-and-evasion course. Along with several other trainees, Echhorn is parachuted to a remote island where she is to be tracked down by the "enemy". Reluctantly teamed with major Tom Skerritt, who has been injured in the jump, Echhorn successfully reaches the "safe" goal she's been assigned, only to learn that she has been dragooned into a far more deadly training program than she'd expected. Put to work in a hard labor camp, Echhorn is subjected to various and sundry humiliations by master sadists Anthony Zerbe and Richard Roundtree. What started out as mere "war games" ends in dead seriousness as Echhorn is forced to face her tormentors alone. ~ Hal Erickson, Rovi

Jeff Moldava
as Guard
View All

...a slow-moving narrative that boasts very little in the way of compelling elements...

An effective, but little-known action-thriller about a military-training exercise taken too far by a crazy commanding officer.

There are no featured audience reviews yet. Click the link below to see what others say about Opposing Force!