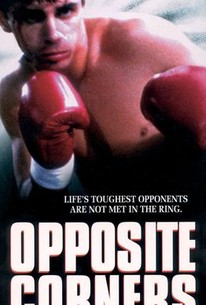 Pop singer Frankie Valli is just too good to be true as a Mafia don in this impressive ring saga about a young boxer (Billy Warlock) trying to step out of the shadow cast by his overpowering father (Anthony John Denison), a brawling ex-fighter and mob boss. Cathy Moriarty costars as the young pugilist's abused mom, and former champ Ray "Boom Boom" Mancini plays his trainer. Jay Acovone.

Critic Reviews for Opposite Corners

There are no critic reviews yet for Opposite Corners. Keep checking Rotten Tomatoes for updates!

There are no featured reviews for Opposite Corners at this time.