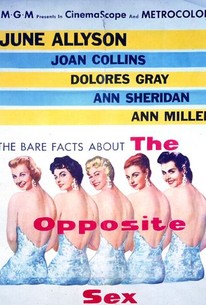 The Opposite Sex Photos

The Opposite Sex is an opulent musical remake of Clare Booth Luce's The Women (1939). June Allyson stars in the old Norma Shearer role, playing the virtuous wife who loses her husband to scheming Joan Collins (as the Joan Crawford character). At first agreeing to a divorce, June decides to win hubby back by utilizing the same crafty feminine wiles that Joan had employed to lead him astray. Doloress Gray plays the counterpart to Rosalind Russell's vitriolic gossip. The original The Women boasted an all-female cast: the remake includes several male characters, played by the likes of MGM contractees Leslie Nielsen and Jeff Richards. Dick Shawn, Jim Backus and Harry James are also on hand, billed as "special guest stars." The satirical bite of The Women has been softened in The Opposite Sex, but musical fans should have a good time. Sammy Cahn, Nicholas Brodszky, Ralph Freed and George Stoll were among the songwriters; Collins, Allyson and Jeff Richards perform musical numbers in the film. ~ Hal Erickson, Rovi

Harry James
as Himself

Art Mooney
as Himself

Bob Hopkins
as Drunk in 21 Club

Janet Lake
as Girl on Train

Critic Reviews for The Opposite Sex

It sparkles with snappy dialogue, a parade of smart fashions and a beauty of a hair-pulling, dress-fearing, name-calling fight.

See the original "The Women" instead.

An awful remake of George Cukor's witty 1939 The Women.

Audience Reviews for The Opposite Sex

colorful remake of "The Women" should have left the men out and June is a little pallid but Moorhead, Blondell, Collins and especially Sheridan spice this up.

The Opposite Sex Quotes