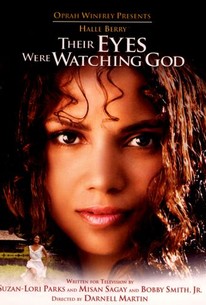 Originally telecast March 6, 2005, by ABC, this "Oprah Book Club" TV movie is adapted from Zora Neale Hurston's novel Their Eyes Were Watching God, a certified classic of African-American literature. Covering the first 30 years of the 20th century, the film is set in Eatonville, FL, a largely black community and the home of free-spirited Janie Crawford (Halle Berry). Forced into marriage with a much older and much wealthier man at age 16, Janie endures both this unhappy union and a second equally dismal marriage, trapped not only by the bonds of matrimony but also by the rigid patriarchal society of the period. Her only happiness is manifested in her ongoing illicit romance with a younger, none too reliable gent known as Tea Cake (Michael Ealy) -- much to the shock and dismay of her very proper neighbors. Devotees of the original novel expressed displeasure over the film's sketchy portrayal of the protagonist, a multidimensional character reduced to an impulsive hedonist for the purposes of the screenplay (though Halle Berry's towering performance more than compensates for the weaknesses of the scripts). More than that, the fans of the Hurston original bemoaned the loss of the novel's pronounced racial content, which harshly criticized the caste system within the Southern black community of the early 20th century, whereby a light-skinned woman was regarded as "superior," and thus more desirable, than her darker-skinned sisters. No one, however, could find fault with performance of the great Ruby Dee as Nanny, nor the film's lush production trappings.

Sean Nelson
as Hezekiah
View All

Winfrey does try to offer TV entertainment of value and with values. But her latest ABC movie, "Their Eyes Were Watching God," is almost comically predictable...

I think the film's concentration on the novel's romantic beats isn't a fault, but rather it speaks to the complexity of Hurston's story.

Never read the book before you watch the movie, because you'll always feel the movie adaptation sucks

A beautiful movie! Love it!!