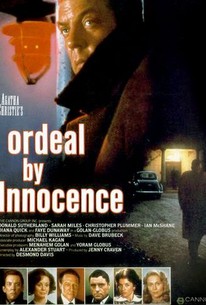 Based on the novel by Agatha Christie and set in the late 1950s, this unevenly told film starts when Dr. Arthur Calgary (Donald Sutherland) comes back to England after two years on an Antarctic expedition and discovers that the man he is searching for has been executed for murder. At the beginning of his expedition he had given a ride one night to a hitchhiker and accidentally ended up with his address book. To his horror, the hitchhiker's mother was killed on that night, and he had been the alibi that would have saved him from execution. Spurred on by his sense of shock and guilt, Calgary makes contact with the family and is put off by their disinterest in finding the real killer. It seems that the mother had many enemies among her close family members: her husband was having an affair, there was a blackmail scheme in the works, and many felt that she had already excluded them from any inheritance. Although the acting is uneven and the plot may seem predictable or contrived to non-Christie readers, the story retains interest, and Dave Brubeck's jazz score adds a special dimension to the proceedings.

Critic Reviews for Ordeal by Innocence

Ordeal by Jazz would be a better title for this wintery Agatha Christie adaptation...

Audience Reviews for Ordeal by Innocence

There are no featured audience reviews yet. Click the link below to see what others say about Ordeal by Innocence!