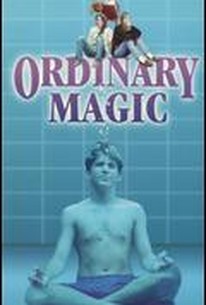 Jeffrey (Ryan Reynolds) grew up with heady ideals of social activism as part of his everyday life. His parents spent the better part of their lives fighting for social justice in India. Now they are dead, and he is only fifteen year old. He has been sent to a small town in Ontario to live with his aunt Charlotte (Glynne Headly). It takes considerable effort, but he manages to make friends and fit into this new, much smaller world of his. However, when his aunt receives an unfair eviction notice from her sleazy landlord (Paul Anka), every bit of his background and training comes to play, and he works with her to put on a well-publicized hunger strike which wins them the admiration of the local citizens and more. ~ Clarke Fountain, Rovi

There are no featured reviews for Ordinary Magic at this time.