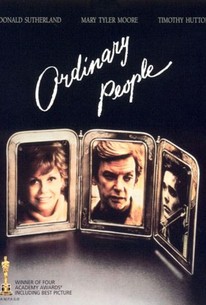 Critics Consensus: Though shot through with bitterness and sorrow, Robert Redford's directorial debut is absorbing and well-acted.

Critics Consensus: Though shot through with bitterness and sorrow, Robert Redford's directorial debut is absorbing and well-acted.

Critic Consensus: Though shot through with bitterness and sorrow, Robert Redford's directorial debut is absorbing and well-acted.

In this film, teenager Timothy Hutton lives under a cloud of guilt after his brother drowns while trying to rescue the suicide-prone Hutton. Despite intensive therapy sessions, Hutton can't shake the belief that he should have died instead of his brother; nor do his preoccupied parents offer much solace.

James B. Sikking
as Ray

Scott Doebler
as Bucky
View All

Ordinary People, consequently, has a closeness but not much expressiveness of texture.

The director's contribution is reticent and unobtrusive; his aim, not surprising perhaps in an actor, had been to give she stage wholly to the text and the performances; and both are, certainly, exemplary.

The movie stands as a luminous portrait of the tragic tone and style of a middle-class life that aspires to nothing beyond materialistic comfort. It seems like a small tragedy. But it's not.

Despite the sponginess of the content, Hutton's extraordinary film acting debut ought to assure his famous novice director a long, successful career behind the camera.

With the skill of a practiced surgeon, Redford gradually peels away the protective layers of his characters, exposing their flaws, their darkest fears and ultimately, their innermost feelings.

Story of emotional honesty is best for older kids.

Episode 15: The West Was Red

With no action, few characters, and little suspense, the film relies heavily on its acting - and what an impressive aspect it is.

Robert Redford brings stirring emotion and impressive skill to this story of an affluent family crumbling under the facade of normalcy.

Adapted brilliantly and faithfully from the surprise best-selling novel by Judith Guest.

Ordinary People (baroque music and all) will probably move a lot of people in the same way as Kramer vs. Kramer did, concerned as it is with people we all know, or might well be.

The greatest discoveries are internal ones, and this intelligent script portrays the inner adventures of a young man named Conrad and the people important to him. We quickly learn the family lost their oldest son, but we don't know how. Only Conrad can tell us and that's unlikely since he was recently released from the hospital after trying to end his own life. Over the course of the film, the skill of unprejudiced listening is introduced, treasured, and honed. Director Redford practices what the story preaches, allowing us to sit in silences with the characters and listen to the truths - something perhaps too risky for modern movies.

Deeply involving family drama, wealthy in emotion, honesty and vigor. Every step of the way it successfully grabs your attention, yet never once going too far or undermining its realism. The tears, the tantrums, the frustrations and breakdowns - all of it acted out in a riveting display of first-rate performances. Everyone in the cast gives it their all, but the real stand-out here is Timothy Hutton. His portrayal of a psychologically distressed teenager, dealing with the loss of his brother and other family-related problems, is beyond fantastic. As can be said for the technical aspects of the film as well. Sublime directing and flawless editing, adds that little extra touch that took this from being a good film, to a great one. Now I can't say I'm much on the overall aestethics, what with all the ghastly 80's perms and questionable fashion style. But considering that's the only thing that bothered me somewhat, shows just what a truly outstanding piece of cinema this really his. A movie about letting go and facing your inner demons, that even after 30 years since its making, still holds incredible emotional value. Truly a must-see, for anyone who has ever suffered through some dark chapters in their life. Because this may very well help your healing process and make you look at things more objectively. At least it did for me, as I could relate to some of its subject matters on a personal level. In that sense, this is not so much a movie, as it is a rare and timeless instrument for moving on and cutting your losses. A larger-than-life motion picture, that gave me so much more than just two hours away from boredom.

I found this portrait of a family crumbling apart in the wake of tragedy to be meerely really good instead of excellent or classic. Maybe I've just seen this type of thing enough to where it really has to be something to stand out...and this film didn't do that for me. Maybe it's because I'm still mad it stoel the Oscar from Raging Bull, and film that truly did deserve it without question. Regardless of all that, this is a pretty good film, although it's not one I'd want to watch all the time. Maybe it's because the characters seemed to emotionally (and otherwise) detached, and it's hard to really feel for them a much as I should have. I'm no cold hearted bastard, but it was a tad difficult for me to completely care. The performances are really what make the film worthwhile though. Even if the characters are cold and distant, and it's hard to root for them, that is to the credit of the people playing them...very nice, warm, and colorful people. Hutton is especially really good, as is Moore, whom really broke type for this movie in a performance that is still probably her most dramatic. Any real faults with this movie could be chalked up to it being Redford's directorial debut, although that's not much of an excuse considering the number of years he spent in the business before deciding to direct. Ok, I'm rambling. Enough of that. You should see this. It offers a decent portrait of a family who are not as ordinary as they try to be, even if it hasn't totally held up overall.

Excellent! I haven't seen Raging Bull yet, but I think this film may have deserved Best Picture. I had never heard anything about this film other than that fact it "stole" Best Picture from Raging Bull, but I'm so glad I finally watched it. It's a timeless classic, that is among my favorite films of all time! The title "Ordinary People" alludes to one the strongest elements of the film, the reality in it. The film basically follows a family after the tragic death of a son, and the attemped suicide of another son. The emotions, attitudes, and overall conflicts were so real. I truly felt like the film could have been about any ordinary person. This film is perfectly acted! Timothy Hutton gives an absolutely phenomenal performance for which he received an Academy Award for Best Supporting Actor. His performance is one of the reasons this film is among my favorites. Mary Tyler Moore gives a completely missunderstood performance as the mother. It's probably a career best for her and she definitely deserved the Oscar nomination. Also, excellent performances by supporting actors Donald Sutherland and Judd Hirsch. All around, perfect main cast with a strong supporting cast as well. Bravo, Robert Redford! Winner of 4 Academy Awards including Best Picture, Best Director, and Best Supporting Actor. Memorable performances, brilliant direction, touching, emotional...this is a powerhouse drama film that everyone needs to see. I completely recommend this masterpiece!