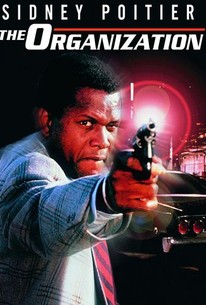 Mr. Tibbs is back in this third re-hash of the formula that had already been done to a turn in In the Heat of the Night and They Call Me Mr. Tibbs. Sidney Poitier, appearing weary of the role, goes through the motions in this inflated television cop film. The plot kicks in when a gang arranges an impressive heist of $4-million in heroin from a furniture factory. It turns out that the gang is not really low-life thieves -- rather, they are a group of people who have been personally scarred by drugs and have decided that the best way to get back at the international drug dealers is to abscond with their merchandise. Unfortunately, during the heist, a murder has been committed. So detective Virgil Tibbs (Sidney Poitier) is called upon by the thieves in order to clear their names and help find the real killer.

Critic Reviews for The Organization

The Organization can be rough on super-city sleuths as well as movie-goers who've been through much the same melodramatics before.

There's a bit of shooting, a few identities are untangled, and the movie comes to an unmourned end.

I, for one, cannot say exactly what is going on in the film.

The trouble with impersonal villains is that they make for impersonal movies. The Organization has its share of chases and gun battles but who is chasing whom is never completely clear.

Audience Reviews for The Organization

Mr. Tibbs is back in this average action thriller, which isn't as good as the first movie at all. It's not that bad, but it's just another action movie.

A year later the third mystery starring Sidney Poitier as Lieutenant Virgil Tibbs was released. This one starts with a thrilling heist. There is an element of the recent TNT show Leverage in this plot as a group of criminals and ex-druggies work together for a good cause. That is namely to get a supply of drugs off the street and bring down the titular international Organization. Tibbs is the good cop on the force that this group who pulled off the drug heist decide to put their trust in. They are framed for murder. Tibbs puts his career on the line by working with this suspect group. This sequel doesn't put as much focus on Tibbs' family. Some father and son generation gap issues and the risque display of affection between a black husband and wife are shown. Otherwise, the plot is more complicated with this mystery. There are double crosses and a higher body count. A couple foot chases and a car chase are squeezed in again. Tibbs does have to do some investigating without his badge and there is more tension between some of the officers (the narcotics division and homicide division, the police management and regular detectives). However in the end, the movie concludes with the same sort of too convenient ending that wants us to believe that justice has been done.

Perhaps the least-known Poitier work, certainly of the period; at date of writing only three flixster members had voted on this film. This is just over 1% of the votes attained by it's initial prequel, the superb "In The Heat of the Night". Between the two is the awful-yet-lovable "They Call Me MISTER Tibbs!" which took the Virgil Tibbs franchise on a downward slope. Those that do get to see this movie on it's rare t.v. rescreenings and decide to give it a go after the disappointing "Tibbs" will be justly rewarded. Essentially, the production team is the same as the previous film, though Gil Melle provides a jazz-orientated score instead of Quincy Jone's adequate but inappropriate themes. The domesticity is also played down, with Alan R.Trustman absent as co-writer and James R. Webb taking full control of the screenplay. Most importantly, though, is Don Medford as the well above average director. Apart from a rather crude edit where a car accident occurs in the second half of the picture, the scenes are melded together seamlessly and flow together exceptionally well. Poitier reprises the role of Tibbs, an arrogant, aloof, bad-tempered, authoritarian, bigoted Lieutenant. As a result, this is probably the most appealing of all Sidney's characters, and he slips back into the role effortlessly. With no star names to support him, such as Rod Steiger or Martin Landau (though Raul Julia did become a star later in life), Sidney stands way above his peers. His ability to project a bad atmosphere every time he walks into a room is flawless. This time he is not let down by the plot, either, which sees Tibbs caught between the Police Department and a vigilante gang that seeks to expose a wide net of heroin dealers. The plot takes on many shifts in loyalty and focus, keeping the attention, while a chase through underground tunnels lends the requisite chase an extra air of tension. The racial motif is again absent, though a rival black cop played by Bernie Hamilton gives off a frisson of resentment. While predictably not of the calibre of "In Heat of the Night", The Organization stands as the greatest of Sidney's seventies vehicles.